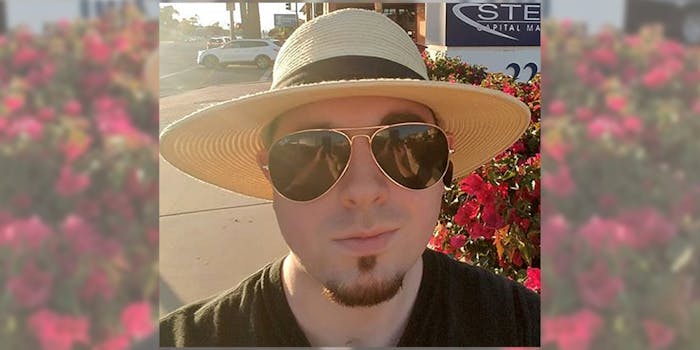 It's impressive to be this bad.

With the entry of Joe Arpaio into the Republican primary for Arizona Senate race, many local and national outlets took time to recount the extent of the former sheriff’s actions and criminal charges (before President Donald Trump pardoned him). From seeming to welcome comparisons of his notorious “tent city” to a concentration camp to investigating President Barack Obama’s birth certificate, the list is long, varied, and lurid.

“Even if it was a concentration camp, what difference does it make?” he told the Guardian last year. “I still survived. I still kept getting re-elected.”

Challenging Arpaio is Kelli Ward, who is running also running on Trump’s “Make America Great Again” agenda, supporting crackdowns on immigration and building a border wall. In the past, she, as well as Arpaio, have done interviews with Alex Jones, the infamous far-right radio show host and conspiracy theorist.

With these candidates in the Republican primary for Jeff Flake’s vacated Senate seat, you might not think the ticket could get any more questionable.

But little attention has been paid to another candidate who is running, and whose background is shocking even next to the resumes of Ward and Arpaio.

Craig Brittain, 33, is running as well, bashing Ward as “Crooked Kelli” and floating concerns about Arpaio’s health. On Twitter, the unlikely, and nearly improbable, candidate has 105,000 followers and spends much of his time on the platform pursuing an endorsement of Trump (seemingly solely through replying to his tweets) and ranting about his various campaign points. His campaign slogan is “Great America Wins!”

In addition to collecting and posting images himself, Brittain encouraged viewers of his site to anonymously submit nude photos of people to his site, according to the complaint, but that wasn’t all.

“He required submissions to include sensitive personal information about the people in the photos, including their full name, town and state, phone number and Facebook profile,” says an FTC statement at the time of the complaint, in early 2016. The complaint also alleged that Brittain engaged in a “bounty system” on his site, in which users could offer a reward of at least $100 in exchange for other users finding pictures and information on a specific person. Some individuals who view these photos use that information to find victims, then send the images to their friends, family members, and employers.

The site was originally launched in 2012 as an homage to Is Anybody Up, a notorious non-consensual pornography (NCP) site, whose founder, Hunter Moore, was arrested by the FBI in 2014 and sentenced to two years in prison in 2015 in relation to his activities around NCP.

“Victims of non-consensual pornography experience a range of devastating and in many cases irremediable harms. The publicity given to their most private moments often results in damage to their professional and personal reputations, loss of employment, removal from school, destruction of personal relationships, and online and offline harassment,’ says Dr. Mary Anne Franks, a Professor of Law, at the University of Miami School of Law and Legislative & Tech Policy Director at the Cyber Civil Rights Initiative. “Victims commonly suffer severe anxiety, depression, body image issues, low self-esteem, and post-traumatic stress, leading some to commit suicide.”

In 2013, Brittain claimed to be shutting down the site of his own accord. But according to Franks, it is more likely that his decision was promoted by the aforementioned Federal Trade Commission investigation. In 2015, Brittain agreed to a settlement with the FTC that banned him from ever operating a revenge porn site again and required him to destroy the intimate images and personal information he had obtained. That doesn’t guarantee the images won’t resurface. Images of this kind are cached by other users of these sites, and appear online again at a later date and time on a different site. Once the images are out there, they are nearly impossible to make sure they are gone forever.

Soon after the FTC settlement, Brittain filed numerous takedown notices under the Digital Millennium Copyright Act (DMCA), demanding that Google remove links that referenced the FTC ruling, claiming that they included “unauthorized” photos of him, “with apparently no hint of irony,” added Franks.

“We’ve been taught since birth that sexuality is shameful, and the perpetrators of this terrible act rely on that shame to control the victim,” says Bowden. “The immediate impulse of the victim is usually to panic, and in that desperate state, most people will do whatever’s necessary to get them down as quickly as possible before the pictures can spread. We’ve seen victims hand over thousands of dollars to websites and lawyers to get the images down.”

The biography page of Brittain’s campaign website lacks any reference to Is Anybody Down, merely noting that “Craig R. Brittain is a technology entrepreneur, election influencer free speech activist, journalist, and CEO. He was born on November 9th, 1984. He holds a 2-year degree from Pikes Peak Community College and carries 15 years worth of job experience in the tech sector.”

His campaign platform minimal, and features only a handful of platform positions, including letting people opt out of government programs and be reimbursed for the tax money they paid to them, ending taxation altogether, extending “the Second Amendment via a bill which nullifies “Gun Free Zones,” allows National Open Carry and removes any regulations regarding firearms, as well as any prohibitions from firearm ownership, as well as authoring “a bill allowing citizens to defend their borders according to Trump’s ‘Build The Wall’ plan.”

Outside of a graphic showing these, and other positions, on his campaign homepage, there is little else in the vein of policy proposals.

His campaign largely seems to be made up of posting or responding to Donald Trump on Twitter, and advertising campaign events, one of which supposedly was to feature Tucker Carlson and Run the Jewels. When, predictably, supposed attendees called him out on the fact they were never attending and that the guest list was largely fabricated, the event page was were changed to say “Guests will be announced soon.”

Meanwhile, of his surprisingly large Twitter following, about half appear to be fake, according to TwitterAudit.com, which examines whether someone has inflated their follower count through the use of “inorganic, fraudulent, or dishonest means. He also has a long record of online harassment, including using racial slurs, according to screenshots obtained by Mic.

Perhaps because of this background, Brittain doesn’t even register on on the most recent polling of the Republican primary candidates.

In a normal election cycle Brittain running would garner a fair amount of attention but with the political hell-mouth that is 2018, he isn’t even on the national radar.  In a race that features candidates where it seems no contender comes without their fair share of controversial behavior, Brittain is a strong candidate for setting the bar as low as it could go, if not for the seat itself.

Benjamin Powers is an NYC-based reporter whose work focuses on technology, policing, and the military. His work has appeared in Rolling Stone, Fusion, New Republic, Pacific Standard, Mother Jones, Complex, and HuffPost, among others.