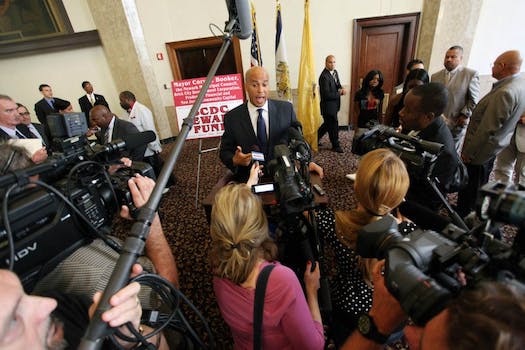 At SXSW, Booker, well known for his active Twitter presence, also hinted at what type of U.S. senator he would be—at least on social media.

Newark, New Jersey, mayor Cory Booker thinks the federal government needs to step up its social media efforts. During a conference at the South by Southwest Interactive Festival in Austin, Texas, Booker, well known for his active Twitter presence, also hinted at what type of U.S. senator he would be—at least on social media.

Booker spoke at a panel with Time.com assistant managing editor Steven James Snyder called “Cory Booker: New Media Mayor” on Sunday. It was there that he shared his criticisms of the government’s use of Twitter.

“[The federal government] is just using it as an announcement system, like you used to listen to in class: ‘The cafeteria will serving roast beed, and I will be at this place or that place,’” he said.

Booker told TechCrunch that Twitter was a great way for him to connect directly with people in Newark, so that he can find out though Twitter “what going on and what’s going wrong with my city.”

Booker has filed paperwork to replace U.S. Sen. Frank Lautenberg, 89, who has chosen not to run again in 2014. He said during the SXSW panel that just because he was working in Washington D.C. doesn’t mean he would use Twitter less, saying it’s now a part of him.

“This world desperately needs authenticity, people who have the courage to tell their truth every single day, and I would not stop being who I am just because of the title that’s before my name,” he said.

Booker’s appearance also gave the tech-savvy mayor a chance to discuss his time on Twitter and how he got there in the first place. For example, it was a discussion with actor Ashton Kutcher that got him hooked on the site in the first place. He also talked about his first major social media mistake, when he joked about Mark Sanford’s “trip” on the Appalachian Trail, which really turned out to be a questionable trek to South America.