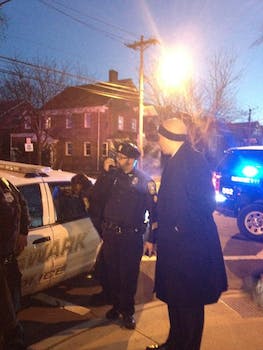 Did the Newark, N.J. mayor just out-Cory Booker himself?

If Cory Booker is like the Batman of Newark, N.J., does that make Twitter his bat signal?

The analogy is arguably accurate, after the social-media-savvy mayor performed his latest good deed Thursday night in response to tweets alerting him to a dog left out in the cold.

“This is brutal weather out here, this dog is shaking really bad,” said Booker, according to the Newark Star-Ledger. “And you just can’t leave your dogs out on a day like this and go away.”

Booker, who is known for performing un-mayoralty gestures like inviting hurricane victims into his home and pulling neighbors out of a burning buildings, was alerted to the freezing dog by ABC7 news reporter Toni Yates.

“Make pet owners get their dogs out of the cold. Saw 2 dogs freezing @eyewitnessabc7 @CoryBooker,” Yates tweeted at the mayor.

Yates followers also began retweeting at Booker, and soon enough the mayor showed up with a couple of squad cars to keep the animal warm while they tracked down the owners. Booker contacted the owner, who said he was unaware the dog, which had just delivered three puppies, had gotten out of the house. The dog was rescued on a night when the temperature in Newark got as low as 12 degrees Fahrenheit.

But this is far from the first time that Booker, a Democrat now in his second term as mayor, has used Twitter for surprising acts of kindness. In 2010, during the height of #snowpocalypse Booker used Twitter as a means of coordinating snow-shovelling efforts that were personally carried out by him and his staff. However, as Time magazine pointed out at the time, some complained that the mayor’s Twitter fixation, and the publicity that comes from it, may have been distracting him from the bigger business of running the city.

When Booker first started tweeting a few years ago, some older Newark residents complained that his online obsession was a narcissistic waste of time. And while it’s fair to wonder if all those unplowed Newark streets serve as an indictment of his administration, it’s hard to knock his Twitter habit now. The media-savvy Booker knows his Twitter transparency is winning political points.

Now, Booker is poised to cash in those political points as he looks to move up in New Jersey politics. He has already filed the necessary paperwork to form a campaign committee for the U.S. Senate in 2014, but he has yet to make a formal announcement while waiting for incumbent Democratic Sen. Frank Lautenberg, 89, to announce his retirement.

But Booker may be waiting for a while. The Star-Ledger reports that Lautenberg may be among those older New Jersey residents who are not amused by all the attention Booker’s received, calling Newark a “city in desperate need of attention.”

“Maybe if the mayor can solidify the fact that he wants to improve Newark by being there, things would be different,” Lautenberg said.

At least Booker’s got the endorsement of a grateful dog and her three pups.