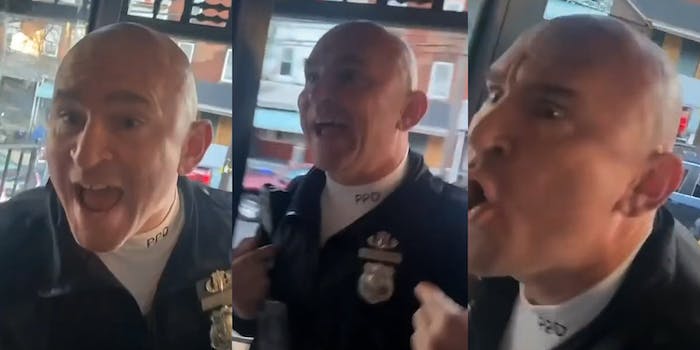 A video of a police officer engaged in a verbal confrontation with a Black woman has gone viral on TikTok and sparked a debate on the officer’s actions.

The clip, which has been viewed more than 276,000 times, shows an officer in Philadelphia yelling at the woman after reportedly chasing a suspect near her home.

The footage begins with the officer claiming that a suspect with a gun had supposedly broken into the back of the woman’s home.

The woman tells the officer that seven people at her home were traumatized by the police response before asking why he had yelled and pointed in her face.

“Whose yelling!?” the officer shouts in return. “I’m matching your energy!”

The officer, who at that point is being held back by a fellow officer, can then be seen swiftly moving his face toward the women’s while holding up his bodycam.

“I’m explaining to you what happened and you’re mad at the wrong people!” the officer continues. “We’re not out here shooting civilians!”

As the officer leaves the front porch, another woman can be heard on-camera stating that her 1-year-old daughter had had a gun pointed toward her during the incident.

The Daily Dot was unable to reach the individual who uploaded the content to TikTok for comment.

Many users in the comments criticized the officer’s behavior, arguing that he should have remained calm during the encounter.

“He’s not suppose to match their energy,” one user wrote. “He’s suppose to remain calm and defuse the situation.”

Another argued that “matching energy” was likely nowhere to be found in any police training manual.

Others felt that the officer was “totally out of control.”

“He needs to be fired immediately before he kills someone, he’s totally out of control,” another said.

At least one user, however, attempted to defend how the situation played out.

“Everyone focused on them arguing. A suspect was caught with a gun in the back of their house,” the user said. “Suppose he got into their home then what.”

The details of what exactly transpired before the video began remain unclear. In a statement to the Daily Dot, the Philadelphia Police Department said that it was aware of the video and that an Internal Affairs investigation has been underway.