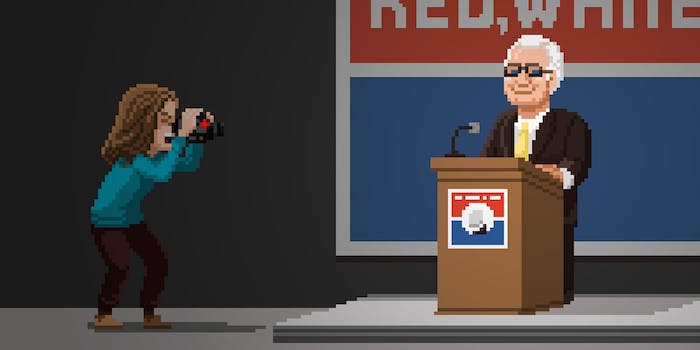 What it’s like to vlog your dad’s presidential campaign

The vlog is funny ... and informative.

Darrell Castle was never shy about talking politics with his daughter, Joanna. At the dinner table, they’d discuss his conservative beliefs. In the car, he’d lecture her on what the U.S. Constitution had to say about abortion and LGBT rights. Around the house, they’d talk about the Constitution Party and why he was helping create it.

For Joanna Castle Miller—now a writer, producer, and comedian who calls herself a “bleeding heart Hollywood liberal”—her father’s political activities are her childhood nostalgia. Joanna was 8 in 1992, at the time her dad helped establish the party that believes in a strict interpretation of the Constitution, considers itself part of the religious right, and trusts in social and fiscal conservatism. The first time she saw the ocean was during a trip with him to San Diego for a Constitution Party convention.

“They didn’t hold back from teaching [conservative political issues] to me. And teaching it to me pretty hard,” Castle Miller told the Daily Dot. “I learned a whole lot about that point of view.”

In other words, Castle Miller knows the Constitution Party through and through—its history, its philosophy, its seven principles. All of which makes this lefty liberal a perfect if unconventional chronicler of the fifth-largest American political party’s latest efforts to loosen the tenacious grip Democrats and Republicans have on U.S. politics: Her 67-year-old father’s run for the White House.

“I can see unequivocally that he would be a better president than Donald Trump, and it’s made it easier to stand next to him.”

Castle Miller’s creation is called Red, White, and Dad—partially a vlog, partially an interview show, and partially political comedy. While the rest of the political world focuses on the unusual battles between Republican presumptive nominee Donald Trump, and Democratic presidential candidates Hillary Clinton, and Sen. Bernie Sanders (I-Vt.), Castle Miller is looking to lend a little levity while her dad runs to become the most powerful person in the world.

They disagree on politics, but both agree that Red, White, and Dad is a way for Castle to introduce himself to Americans while Castle Miller tries to mold and shape what she calls “comedy manna handed down to me by a loving God.”

“As a family [in politics], there’s an assumption that you will stand beside this person, and I’m fortunate, because I really like my dad,” Castle Miller says. “I can see unequivocally that he would be a better president than Donald Trump, and it’s made it easier to stand next to him. At the same time, I’m clarifying that this isn’t a campaign video. It’s a comedy show with its own unique point of view.”

That creates a fine line for Castle Miller to walk. She wants the videos to be funny but not condescending. She doesn’t want to be a Constitution Party shill, but she wants to support her dad.

The first few installments of Red, White, and Dad strike that elusive balance and tone. They’re funny—in part because Darrell Castle has a dry sense of humor that he’s not afraid to show—and they make light of the party (but not necessarily the people inside the party). It’s also clear that Castle Miller loves her dad but doesn’t feel the same way about his ideology.

Castle is in on the game. He knows this kind of publicity can be a boon for a party that is largely unknown and that, for now, is only scheduled to be on the presidential ballot in 19 states. He also realizes that trying to attract a younger crowd—the kind of voters who pay attention to viral videos on social media—will help solidify the party’s future.

“I know I have a pretty talented girl, and I knew this would be something of high quality,” Castle, a lawyer from Memphis who was on the party’s ticket as a vice presidential candidate in 2008, told the Daily Dot. “I knew I could trust her. I knew she understood the dignity and the awesome nature of what I seek to do. She would treat that with respect and not make something out of it that looked foolish or was embarrassing. I trusted her 100 percent.”

Castle admits that there’s “a little bit of jabbing” from his daughter, and that “she and I don’t agree on every issue.” Still, he says, “she’s not making fun of us. The relationship between she and I, perhaps it wouldn’t have worked with any other candidate.”

The on-screen chemistry is apparent, and the video on ballot access is funny and informative, even if Castle Miller compares her dad’s energy level to that of Jeb Bush.

This experiment, though, also raises interesting questions. What happens if Castle could siphon enough voters away from Trump to hand the presidency to Clinton? “It’s a very interesting place to be to think about what could this end up meaning,” Castle Miller says.) What does the Constitution Party itself think about the vlog? (Both Castle and Castle Miller say the response has been positive.) And, perhaps most importantly, does she actually want her father to be president?

“If he’ll give me a state visit to China,” Castle Miller jokes, “I’d be OK with it.”

Despite her dad’s conservatism, Castle Miller says she began swinging to the left on the political pendulum at about 12 years old. She questioned the consistency of her dad’s beliefs, asking questions that were tougher and tougher. He answered as best he could, but she began to believe in his ideology less and less. She says they never argued—but when the fuse for verbal fireworks began to smoke, they’d leave the conversation on the table and focus on something else.

That kind of friendly disagreement is what makes Red, White, and Dad possible.

“I want to make people laugh and give people a breath of fresh air,” Castle Miller says. “But I also want to show an example of what a healthy disagreement can look like in a family. We get along really well for two people who disagree on so much. It’s taken a lot of work. It’s taken a good sense of humor from both of us and a sense of humility.”

“He jokes that this is America,” she adds, “and I have the right to be wrong.”