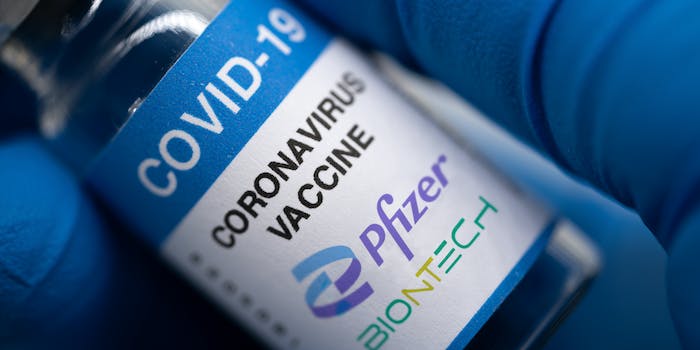 Take a look at this week's 'One Dumb Conspiracy' newsletter.

The claim began spreading online earlier this month after the conservative organization, which has been criticized in the past over the accuracy of its reporting, released a report that purported to show leaked emails from the pharmaceutical giant Pfizer.

The alleged emails detail a conversation in which a Pfizer employee appears to call on others to downplay the use of aborted fetal cells in the vaccine’s development.

“One or more cell lines with an origin that can be traced back to human fetal tissue has been used in laboratory tests associated with the vaccine program,” the alleged email reads.

Cell lines are laboratory-grown cells that are based on aborted fetal cells. In the case of COVID vaccine research, the cells used are copies that have been replicated thousands of times from cells dating back to the 1970s.

Users across social media saw the emails as undeniable evidence that the vaccine contained human tissue and warned others against receiving the shot.

“One of Pfizer’s ingredients for their experimental vaccines is ABORTED FETAL CELLS,” one user wrote. “Let that sink in.”

“Aborted fetal cells is in the Pfizer vaccine,” another user added. “I’m going to be sick.”

Despite the claims made online, the COVID vaccine does not contain aborted fetal cells. Not even the alleged email cited by Project Veritas makes that claim either.

Instead of trying all those “hacks” to save on plane tickets (that don’t work), let Dollar Flight Club do the heavy lifting. It’s vigilant about ticket prices, and will alert you anytime flights from your favorite airport drop to 60-90% off. And best of all, it’s $1 to try the club. Sign up today and save big next time you fly.

The alleged email clearly states that cell lines were used during the testing phase of the vaccine’s development.

Although the alleged email suggests that attempts were made to “not share” the information unless “strictly necessary,” the use of cell lines in the vaccine’s development has long been known.

Articles on the subject have repeatedly been published since at least July of last year.

As noted by Snopes, James Lawler, the associate professor of the Department of Internal Medicine at the Nebraska Medical Center, is just one of many medical professionals who weighed in on the issue long before the Project Veritas video.

“The COVID-19 vaccines do not contain any aborted fetal cells,” Lawler wrote. “However, fetal cell lines—cells grown in a laboratory based on aborted fetal cells collected generations ago—were used in testing during research and development of the mRNA vaccines, and during production of the Johnson & Johnson vaccine…”

Lawler further noted that “almost all the medical products we use have in some way been touched by research that’s been done on fetal cell lines.”

While some may still have ethical concerns over the use of cell lines in the testing phase, the claim that Pfizer’s COVID vaccine contains aborted fetal cells is untrue.