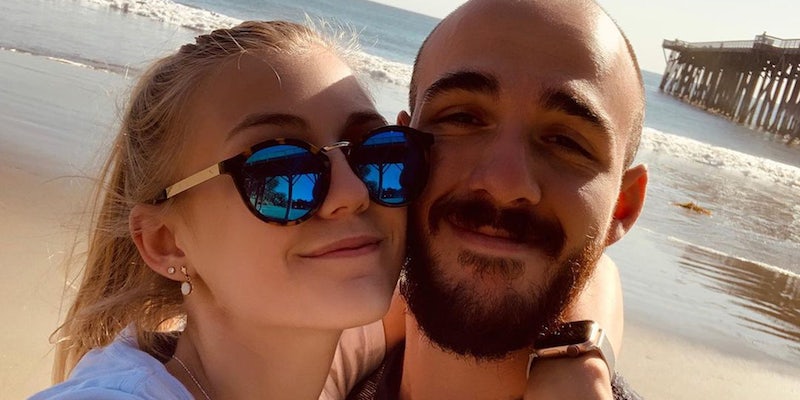 Did Brian Laundrie live stream from a lake after Gabby Petito’s body was found?

Investigators are searching for Laundrie in Florida.

Tweets say Brian Laundrie, Gabby Petito’s fiance and a “person of interest” in the influencer’s homicide, live streamed on Instagram on Monday for a few seconds. Footage of the alleged live stream circulating on Twitter and TikTok shows open water, a camouflage Croc shoe, and a floating plastic jug.

But it’s questionable, at best, that the video was actually a live stream from Laundrie’s Instagram account. Laundrie’s Instagram handle is @bizarre_design_, which has been tagged in multiple photos from Petito’s account (@gabspetito) since March 2020. He last posted a photo to his account on Aug. 13.

A TikTok by Canadian YouTuber Joseph Morris shows part of the footage but doesn’t include an Instagram account tag. Other screenshots of the viral clip show a knee, and some users say it proves that whoever took the footage was not alone.

Morris has been covering the case closely and posted the footage on TikTok and Twitter on Monday evening. The Daily Dot has reached out to Morris, who responded to inquiries but did not immediately tell the Dot where he got the footage from.

Petito’s body was found on Sunday at a Wyoming camping site after her family reported her missing on Sept. 11. Laundrie’s family told investigators that the 23-year-old left for Carlton Nature Reserve in Venice, Florida, on Sept. 14, though public trust of Laundrie’s family has waned since then.

Inside Edition reported that Laundrie may have been spotted by a motion-activated wildlife camera in Carlton at 6am on Tuesday.

According to Inside Edition, FBI and police in Florida are using swamp buggies to search for Laundrie in the marshes of Carlton, which is infested with alligators. Friends of the Carlton Reserve announced that the park was “closed until further notice” on Tuesday.

Notably, Twitter users said they noticed the alleged Instagram live stream before Laundrie was apparently captured on camera and before Morris posted the clip on his social media accounts. One of the first tweets referencing the live stream was posted midday on Monday.

But many Twitter users aren’t sure about the live stream’s credibility—if Laundrie himself took the video, if it was an “accidental post,” or if it occurred at all.

Another tweet posted Monday by @PGreenPopps says that they follow Laundrie on Instagram and didn’t receive a notification about his account going live. According to Business Insider, however, notifications about an account starting a live stream don’t necessarily go to all followers.

Other Twitter users speculated about the clip of the alleged live stream itself and the lack of context that would lend it credibility.

“There was no chat/viewer count/profile pic etc in the recording,” tweeted @stelllagrace. “Plus it was super good quality, unusual for an ig live.” A tweet showing screenshots of a recent live stream from actor Sarah Paulson illustrates @stelllagrace’s point.

Some users said that if the live stream footage was real, the viewer count and other metrics would have been cropped out to produce the footage that was posted.

“I definitely think someone faked it,” tweeted @addiepenguin.

The Daily Dot has reached out to @PGreenPopps.