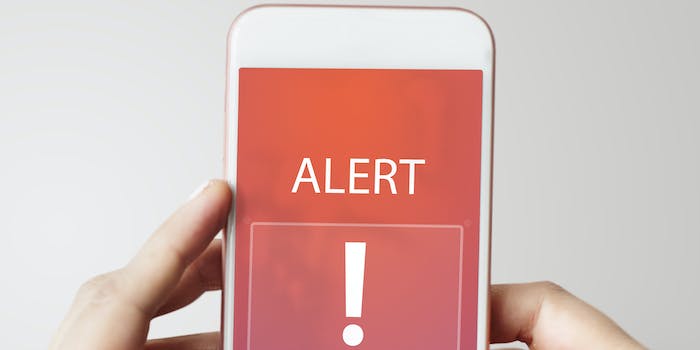 A mundane emergency alert sparked a flurry of conspiracies

A mundane emergency alert sparked a flurry of conspiracies (of course)

Supporters of the QAnon conspiracy theory and others were sounding the alarm last week over a routine test of the Emergency Alert System.

In a tweet last week, the Federal Emergency Management Agency (FEMA) announced that it would be testing the system by sending an alert to televisions, radios, and some cell phones on Aug. 11.

“Reminder: At 2:20 PM ET today, we will conduct a national test of the Emergency Alert System in coordination with @FCC,” FEMA tweeted on Wednesday morning. “The test will appear on televisions & radios, while specially configured cell phones will receive an emergency alert test code message. #IPAWS”

FEMA, which carried out the test alongside the Federal Communications Commission (FCC), noted in a press release that the exercise was intended to ensure that public safety officials can deliver “urgent alerts and warnings to the public in times of an emergency or disaster.”

While such tests are commonplace and have been ongoing for decades, conspiracy theorists spent the days, hours, and minutes leading up to the test predicting some sort of apocalyptic event.

One conspiratorial Twitter user suggested that the test would result in the federal government placing those who have declined the COVID-19 vaccine into internment camps.

“They are getting ready to fill the camps already in place with anyone who hasn’t received the experimental injections,” the user said. “I’ve already made my preparations, have you?”

The Emergency Alert System has long been a focus of conspiracy theorists, many who believe that such a test will coincide with a devious government plot.

Dame is a sex toy maker that’s looking to make the world a happier place, one vagina at a time. Their best selling vibe, Eva, is nearly universal, and great for all kinds of play. It’s got a three-speed motor that never quits and is worn in the vulva, making it totally hands-free. Here’s some of it’s stand-out features:

More control: Eva’s flexible wings nestle under your labia, for a secure and comfortable fit, even when you’re trying adventurous positions.

No hands, no hassle: Never struggle with holding a toy in place again. Your hands are free to shift your weight, move around, and focus more on getting intimate with your partner.

Partners totally optional: Eva works equally well with a partner or if you’re just trying to get intimate with yourself.

Plus, it has all the convenient features you want in a sex toy. It’s waterproof, made from medical-grade silicone, and comes with its own lovely charging case. Choose your own adventure.

In January, attorney Lin Wood, a major source of election fraud conspiracy theories, urged his followers not to update their iPhones over claims that Apple was disabling their ability to receive emergency alerts.

Wood claimed that Apple was attempting to stop Trump, who had recently lost the 2020 presidential election, from using the Emergency Alert System to secretly contact his supporters.

Wood even claimed that a major nationwide blackout was imminent. In reality, none of Wood’s claims were true and many of his followers were left vulnerable by disabling their phone’s security updates.

Users on Telegram, a popular app among QAnon adherents, likewise suggested that the test would result in calamity. Many also pointed to previous “Q drops,” messages left on far-right message boards by “Q” as evidence that the mythical character had predicted the impending doom.

Former 8chan administrator Ron Watkins, who many believe could be responsible for posting as Q, likewise alerted his followers to the planned test—sending them into a frenzy.

Other theories included the claim that the test would censor MyPillow CEO Mike Lindell’s “Cyber Symposium” while others suggested the test would unleash deadly 5G waves onto the population.

“They’re going to send a vibration through your phone,” one user on TikTok said. “Just remember, brain waves is the delta variant, the sleeping and the dreaming. I’m just saying this is all too deep to be a coincidence.”

Another user on TikTok even claimed that the test would set off a “kill switch” targeting those that had been vaccinated.

Unsurprisingly, once the test finally came, nothing significant happened. The fabled “Storm,” the day when QAnon believes Trump will ascend to the Oval Office to banish his enemies, did not arrive.

In fact, many reported not receiving the alert on their phone at all. Others said the alert had made its way to their Androids but not iPhones.

For a system that is supposed to signal a major catastrophe, the beginning of a conspiratorial government takeover, or Trump’s messiah-like return, it sure has some major kinks to work out.