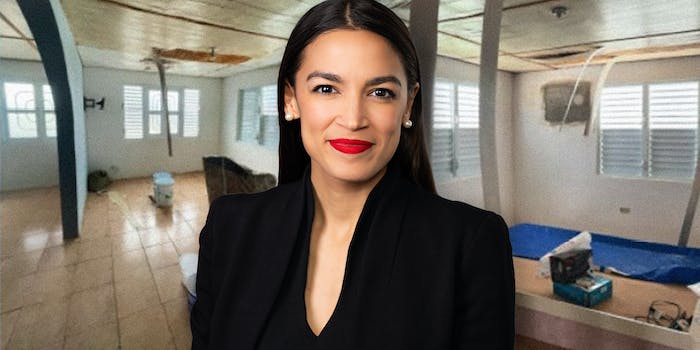 The campaign comes after AOC shared pictures of her grandmother's dilapidated home.

Prominent conservatives appear to be trolling Rep. Alexandria Ocasio-Cortez (D-N.Y.) by spearheading a donation campaign for her grandmother.

Matt Walsh, a host for conservative Ben Shapiro’s news outlet the Daily Wire, revealed in a tweet on Friday that he had launched a GoFundMe campaign to aid the congresswoman’s relative.

The GoFundMe comes after conservatives accused the New York congresswoman of neglecting her grandmother after she posted photos of her home that was damaged by Hurricane Maria in 2017.

“As you’ve heard, @AOC’s abuela is living in a dilapidated home that was ravaged by Hurricane Maria,” Walsh tweeted. “AOC is unable to help her own grandma for whatever reason, so I have set up this Go Fund Me campaign to save her home. Please give if you can. #HelpAbuela.”

The tweet from Ocasio-Cortez earlier this week immediately spurred accusations that Ocasio-Cortez had failed to aid her grandmother, with conservatives highlighting not only the congresswoman’s six-figure salary but the fact that Hurricane Maria and the ensuing damage to the home had occurred all the way back in 2017.

Walsh on Wednesday responded to Ocasio-Cortez’s tweet with condemnation: “Shameful that you live in luxury while allowing your own grandmother to suffer in these squalid conditions.”

Ocasio-Cortez shot back shortly after, arguing that she was “calling attention to the systemic injustices” faced by all residents of the U.S. colony.

But it appears Walsh didn’t stop there. In a description for the GoFundMe page, the conservative made mention of the congresswoman’s Tesla while eliciting funds for the campaign.

“One cannot be certain of the cost to repair grandma’s house, but surely most of the work could be completed for the price of AOC’s shiny Tesla Model 3,” Walsh wrote.

“Sadly, virtue-signaling isn’t going to fix abuela’s roof. So we are,” Walsh added. “Let’s all kick in to help save AOC’s abuela’s ancestral home. Any amount is appreciated, but the cost of a monthly lease payment on that Tesla is around $499.”

After Walsh’s initial donation of $499, other well-known conservatives began joining in as well. Shapiro likewise donated the same amount while calling on other right-wing figures, such as Glenn Beck and Steven Crowder, to pull out their wallets.

In a tweet at the congresswoman, Walsh asked to be sent a direct message so that he could “get the necessary information to ensure that this money makes it to your grandmother.”

Ocasio-Cortez has not yet responded to the ongoing campaign, which, while supportive, is clearly designed to embarrass the progressive politician.