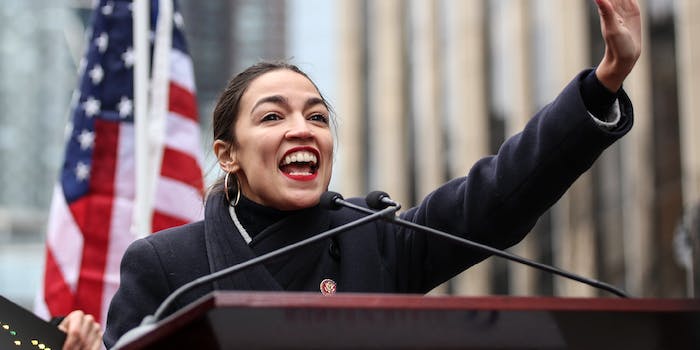 Rep. Alexandria Ocasio-Cortez (D-N.Y.) has found herself at the center of yet another partisan squabble after tweeting about her grandmother on Wednesday.

The congresswoman, who recently traveled to Puerto Rico after her grandmother fell ill, shared photographs of her trip on Twitter and immediately sparked both sympathy and criticism.

Taken inside the home of Ocasio-Cortez’s grandmother, the pictures show dilapidated conditions reportedly caused by Hurricane Maria in 2017.

“Just over a week ago, my abuela fell ill. I went to Puerto Rico to see her- my 1st time in a year+ bc of COVID. This is her home,” the congresswoman tweeted. “Hurricane María relief hasn’t arrived. Trump blocked relief $ for PR. People are being forced to flee ancestral homes, & developers are taking them.”

But opponents of Ocasio-Cortez claimed that the pictures highlighted the congresswoman’s mistreatment of her own grandmother.

Prominent conservatives such as Daily Wire commentator Matt Walsh accused the Ocasio-Cortez of failing to financially support her grandmother in the wake of the nearly 4-year-old natural disaster.

“Shameful that you live in luxury while allowing your own grandmother to suffer in these squalid conditions,” Walsh tweeted.

Lavern Spicer, a Republican candidate running for office in Florida, likewise suggested that Ocasio-Cortez had ignored her grandmother’s plight.

“Honey, you drive a Tesla and have two apartments. If your grandmother is living poor that’s because you don’t help her out,” Spicer said. “I’m surprised that a socialist wouldn’t redistribute that wealth to their grandma. Sad!”

Supporters of Ocasio-Cortez viewed the tweet differently. They argued that it in fact showed the congresswoman’s concern for not only her grandmother’s well-being, but the well-being of Puerto Rico as a whole.

“Thank you for continuing to do a great job,” comedian Kathy Griffin wrote. “You represent Americans better than we represent ourselves.”

Others pushed back on the assertion that Ocasio-Cortez was wealthy and the claim that vehicles made by Tesla were luxury items.

“Funny that many people think the salary AOC makes is alot [sic] of money to live off of in the US AND that Teslas are luxury cars,” @nicolejabaut said.

But critics of Ocasio-Cortez pushed back further by arguing that the congresswoman’s salary, roughly $174,000 a year, provided more than enough to fix her grandmother’s home.

“You make nearly $200,000 a year. Why not peel off a few bucks for a family member in need?” @NextLAMayor tweeted. “That’s literally what family does for one another.”

Ocasio-Cortez eventually responded to the attacks by stating that her grandmother was taken care of before further highlighting the “systemic injustices” in Puerto Rico.

“You don’t even have a concept for the role that 1st-gen, first-born daughters play in their families. My abuela is okay,” the congresswoman said. “But instead of only caring for mine & letting others suffer, I’m calling attention to the systemic injustices you seem totally fine w/ in having a US colony.”

More than 3,000 lives were lost as a result of Hurricane Maria, which also caused an estimated $90 billion in damages to Puerto Rico.