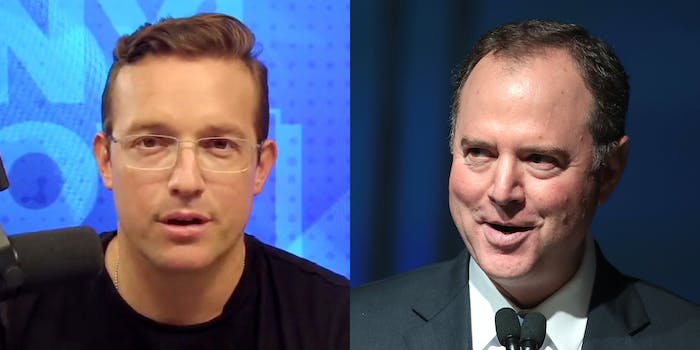 The 'whataboutism' is strong.

Capitol Police arrested a crew from The Late Show With Stephen Colbert on Thursday for being inside a congressional building without authorization. The group was reportedly filming a comedic segment with the puppet Triumph the Insult Comic Dog for the show. Police charged them with unlawful entry.

Now some Republicans are likening their conduct with those of accused Capitol rioters. They’ve also taken to referring to the Colbert crew’s alleged conduct as an “insurrection.”

Other conservatives are making the same claim.

During the Capitol riot of Jan. 6, 2021, a violent mob attacked Congress in an effort to overturn the election in favor of former President Donald Trump based on claims of widespread election fraud.

Nearly 900 have been arrested for their alleged actions that day. Several, including leaders of far-right extremist groups the Proud Boys and Oath Keepers, have been charged with seditious conspiracy.

In the year-and-a-half since, some prominent Republicans have mischaracterized the violence and looting that left several people dead, more than 150 police officers injured, and caused millions of dollars in damages as similar to a group of tourists visiting the Capitol.

The Jan. 6 congressional committee is currently holding a series of hearings about the riot.

Critics of that committee wasted no time pouncing on news of the Colbert crew’s arrests to distort perceptions of the Capitol riot.

Some are even calling for either or both Colbert and Rep. Adam Schiff (R-Calif.) to be arrested. Republicans have accused Schiff of letting Colbert’s crew into the building. Schiff’s office hasn’t commented.

Benny Johnson of Turning Point USA recently posted a video that inaccurately claimed that Colbert’s crew was arrested for insurrection. Many commenting on the video called for Schiff’s arrest.

“Adam Schiff arrested yet?” wondered one. “Put him in jail with the nastiest criminals that we have let them where [sic] him out,” another said.

But in calling for the arrest and prosecution of these people, conservatives are unintentionally admitting to the illegality of the acts on Jan. 6.

Some have likened Schiff’s alleged conduct to that of Rep. Barry Loudermilk (R-Ga.), who the Daily Dot recently reported gave a tour of the Capitol to people who planned to attend the protest that became the riot.

It may also be somewhat inspired by a recent poll finding that nearly 60% believe that Trump should be criminally charged for his role in the riot.

Many are characterizing such arguments as bad faith “whataboutism” to distract from the Jan. 6 committee hearings and downplay the Capitol riot.

“Loudermilk literally gave a reconnaissance tour to Trump’s terrorists on Jan. 5,” wrote one.

Even some who believe that Colbert’s crew should be prosecuted if they broke the law aren’t buying Republicans’ attempts to liken their alleged actions to the Capitol riot.

“If Stephen Colbert’s staff entered Capitol buildings illegally, arrest them. Absolutely. But don’t pretend that this in any way was like January 6,” commented @Minuteman04.

“They weren’t there to overturn an election or begin an insurrection.”