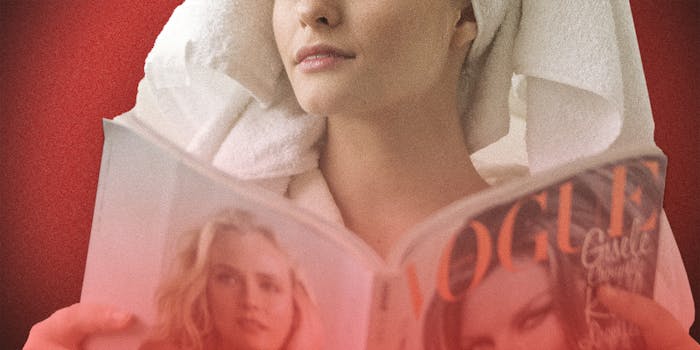 The right wants to cancel the 'woke' publication.

Teen Vogue is once again in right-wing media’s sights. The latest course of attack includes mining staffers’ social media for reasons to cancel them.

Since launching as a beauty- and celebrity-focused publication in 2003, Teen Vogue has branched out into a broader range of subjects, including political and social commentary. Some of its work is unapologetically leftist. It’s published articles critiquing capitalism, explaining Karl Marx’s modern-day relevance, and examining racism in America as partially embodied by former President Donald Trump.

Over the past five years, Teen Vogue has made quite a splash with this type of coverage. Along the way it’s earned the ire of conservatives everywhere.

Right-wing media has gone after the Condé Nast publication in the past. Now it’s begun attacking staffers themselves.

Last week, incoming editor-in-chief Alexi McCammond abruptly announced that she was no longer taking the role. Her departure was precipitated by backlash against her hiring, some of which centered on racist and homophobic tweets from when she was a teen. The recent mass killing of eight people, six of them Asian-American, also reportedly factored into the decision. Some of McCammond’s tweets were about Asians.

McCammond had previously apologized for her statements. She did so again after the tweets resurfaced.

“I’ve apologized for my past racist and homophobic tweets and will reiterate that there’s no excuse for perpetuating those awful stereotypes in any way,” she posted on Twitter. “I am so sorry to have used such hurtful and inexcusable language.”

Lost in the discourse over the tweets was more nuanced discussion over how McCammond likely wasn’t a good fit for Teen Vogue.

Although Teen Vogue’s desire to not have McCammond is an internal calculus, conservative media is using this as an excuse to mine other Teen Vogue staffers’ social media for problematic tweets.

Over the weekend, Fox News reported that the publication’s senior social media manager Christine Davitt used the N-word in two tweets in 2009 and one in 2010. In the 2009 tweets, she reportedly addressed a friend the outlet identified as appearing white as “n—a”; in 2010, she wrote a joke about the “contradictory nature of the phrase white n—a.”

The story was picked up by Daily Mail and the New York Post, which typically veer conservative. These outlets made much of Davitt signing a letter staff sent to management noting McCammond’s previous racist and homophobic tweets and seeking an internal conversation about her hiring, which the publications cast as supporting her ouster.

Following the latest stories on Davitt, numerous Teen Vogue staffers locked their Twitter accounts, which some on the right heralded as a sign of victory or guilt. Speaking on background, a source within the company said they were merely protecting themselves against the coordinated attack.

“Cancel culture eats its own,” opined one Twitter user who describes themselves in their bio as a “deplorable Libertarian.”

The incident has raised questions about cancel culture and whether there’s a statute of limitations on repercussions over tweets, as well as how much context matters. Both the women in question were teenagers when they made these posts. McCammond’s tweets were viewed by many as derogatory; Davitt’s much less so.

It’s also highlighted how right-wing media attacks those with whom it disagrees, even when it means holding them to standards they don’t personally agree with.

Conservative publications love to lament the evils of the “woke” and their “cancel culture.” (See coverage of Dr. Seuss, Mr. Potato Head, and even McCammond.) But when they have an opportunity to use cancel culture against their chosen enemies, including for conduct they themselves are arguably unlikely to penalize, these publications don’t hesitate to fire at will.

Taken cumulatively, such attacks appear to be little more than a means of silencing detractors.

The right has long been gunning for Teen Vogue for publishing content it deems liberal or progressive. The Gateway Pundit has been going after it for years. Breitbart recently posted a video likening Teen Vogue to “Marxist propaganda” and claiming that the publication is aiming to dismantle the nuclear family.

Conservative media likes to pretend they oppose cancel culture, but clearly they have no qualms deploying it against those they don’t agree with.