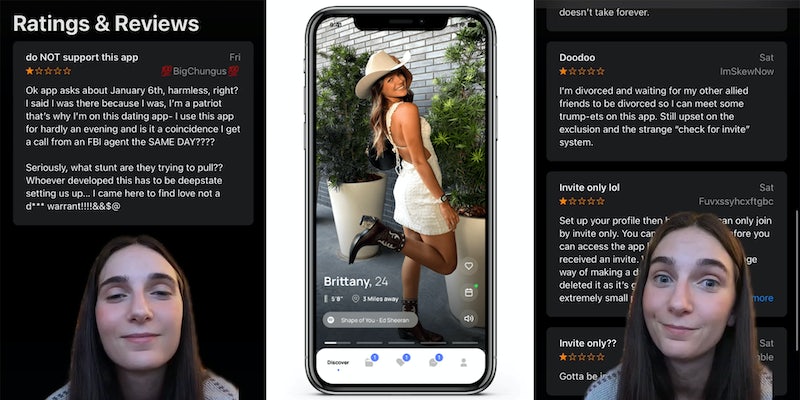 ‘Not someone admitting to a federal crime in the comment section’: Conservative dating app could be helping FBI investigate Capitol rioters

Conservative dating app the Right Stuff launched on Friday. The Peter Thiel-backed app founded by a man who worked in former President Donald Trump’s administration is already having problems.

As one reviewer noted, a particularly glaring issue is that it might actually be a useful tool for Federal Bureau of Investigation (FBI) agents investigating the Capitol riot.

Cheyenne Hunt-Majer (@cheyenne.l.hunt) posted a TikTok featuring the review claiming that the Right Stuff could be a fed honeypot.

@cheyenne.l.hunt The moment we’ve all been waiting for, has arrived! The viral, conservative dating app, The Right Stuff, has launched. The app is currently averaging one star on the App Store and some of these reviews have me rolling 😂 #conservative #political #trump #politics #politicalcomedy ♬ Monkeys Spinning Monkeys – Kevin MacLeod & Kevin The Monkey

Reviewer BigChungus said that one of the app’s prompts asks about the Capitol riot but suggested they initially thought this was “harmless, right?”

“I said I was there because I was, I’m a patriot. That’s why I’m on this dating app,” BigChungus wrote.

“I use this app for hardly an evening and is it a coincidence I get a call from an FBI agent the SAME DAY????” BigChungus said. They accused the Right Stuff of being a “deep state” operation.

“I came here to find love not a d*** warrant!!!!” BigChungus concluded their one-star review called “do NOT support this app.”

On TikTok, Hunt-Majer laughed, “Not someone admitting to a federal crime in the comment section.”

People who watched her TikTok agreed. “Wait….is this app purely for getting them to indict themselves? Lol,” one user wrote.

Another said, “A giant unintentional (or is it…) honey pot big enough to make Winnie the Pooh have a poohgasm.”

Some reviewers said they do like the app, though many complained that requiring people to be invited is prohibitive for creating a large enough dating pool for it to be useful.

A reviewer whose screen name includes numbers popular with white supremacists described it as a “great concept” but lamented that “all you can do is make a profile” until someone invites you.

Hunt-Majer agrees that the invite-only feature is problematic.

One person who reviewed the app further claimed that there are no women on the Right Stuff, just “loads of handsome men.”

The Right Stuff—which critics have disparaged as the Reich Stuff and the White Stuff—is too extreme for at least one user who describes himself as conservative.

“…[T]his is an app for extremists to meet…. This is a site that is a breeding ground for misinformation and hate,” wrote Bill of its prompts about the Capitol riot and what your “favorite liberal lie” is.

“This app is just another space for people to become more extreme [in] beliefs that are rooted in hate and fear of things you shouldn’t even care about but the media told you should care. Stupid,” he added.

The Right Stuff might not be particularly helpful for conservatives looking for love. But it could still prove useful for the FBI.