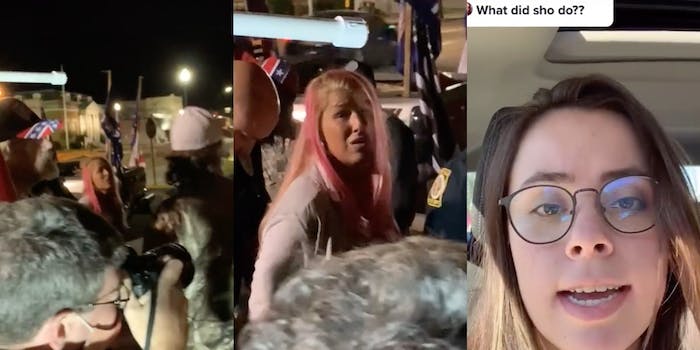 ‘Confederate Karen’ cries after getting arrested for threatening BLM protesters

The video begins with police cuffing “Confederate Karen.” A Black Lives Matter protester says, “nobody threatened over here. We don’t threaten over here.”

The videographer (@maggotsknees on TikTok), though, is laughing at the woman: “Oh, you started crying real quick, huh?”

The TikTok user subsequently provided more context about “Confederate Karen” and the other Trump supporting counter-protesters. She explains about the Confederate flag at a courthouse in Albertville, Alabama, and that she’s part of a protest group calling for it to come down.

“[We protested] to get rid of it, put it in a museum, anywhere but a courthouse,” she says. “It got a little heated last night, and one of the people fighting to [keep the flag] went up to one of our organizers and started yelling in face, saying how she was gonna beat her up, she was gonna hurt her.”

“Somebody else said that they were coming to shoot and kill us. [But] that lady, her attitude changed as soon as [the police arrived and arrested her.]

She also provided another video, isolating the troublemaking Trump supporters, including “Confederate Karen” and a man that accompanied her. The unnamed man allegedly said he had an assault rifle in his truck and he would use it. However, he fled the scene as police arrived.

The good news is that the Confederate flag did come down at the Marshall County Courthouse in Albertville, at least temporarily. The bad news is that was “replaced with a flag that marks the state’s secession from the United States in 1861.”

According to AL.com, “the new flag placed at the courthouse is a replica of a design for the Alabama Secession Convention before the outbreak of the Civil War, according to the Alabama Department of Archives and History.”

However, the Confederate flag would make its way back up.

As of last Thursday, not only was the flag back up, it appears that the county built a fence around it.