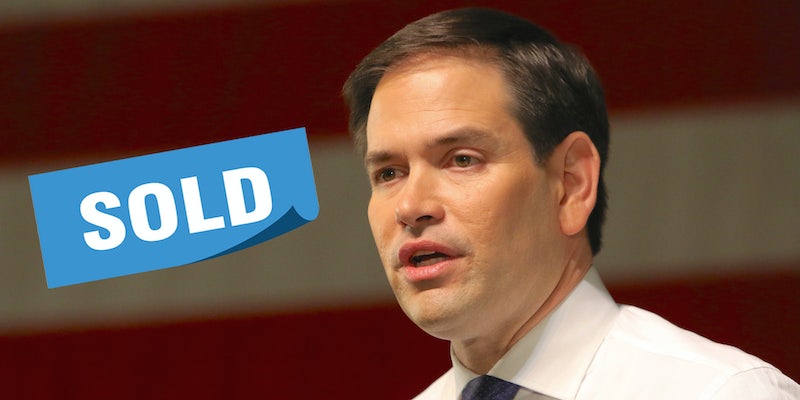 A comedy writer buys websites containing Republican lawmakers’ names and creates satirical pages that rip them to shreds. The politicians are not amused. Toby Morton, the man behind the sites, says he’s been threatened, trolled, and had an anonymous person try to buy one of the sites.

“They’ll threaten me, but in the end, they just want to show they’re not going to back down,” he told the Daily Dot in a phone conversation on Thursday.

Morton is a South Park alum who today rewrites scripts for production companies. He told the Daily Dot that he sort of stumbled into creating satirical political websites as a creative outlet.

In 2019, the satirical Devin Nunes’ Cow account had him do some animation and writing. Then he read about a small-town candidate who bought a URL with their opponent’s name in it and redirected it to their own site. He thought that was clever, but would be even better if they created a parody page instead.

So he made one.

“DevinNunes2020 was the first one I did,” Morton told the Daily Dot.

Nearly all of his sites have URLs one would expect the politician to buy if only to keep others from getting it. Examples include senatormarcorubio.com, thelaurenboebert.com, kevinmccarthy2022.com, and elisestefanik2022.com.

He’s often surprised that a URL is available. “I’m so shocked that a lot of these politicians don’t pick up their 2022 dot com,” he said.

On these pages, he uses publicly available information and critiques to lambast his targets. Boebert’s references her QAnon beliefs and ties to extremist militias. McCarthy’s says of the Capitol riot, “This is and always will be Kevin’s legacy. He helped create these monsters.”

The Stefanik website slams her for repeating the racist “great replacement” theory, as she did in campaign ads last year, which resurfaced after the racially motivated Buffalo, New York mass shooting. “Let’s keep it white,” Morton’s satirical homepage for Stefanik states, “The replacement theory and why I support it.”

Morton didn’t intend to use his skills against politicians. He told the Daily Dot that he grew up in a “fairly political environment,” but tried to steer clear of politics in his writing career.

That changed in 2016. “The atmosphere when [former President Donald] Trump came into power, it was too big to ignore,” he said. Morton, a Democrat, said that today’s Republican Party doesn’t resemble the party of his youth, that of Ronald Reagan and George Bush.

“I just don’t see them as a party, I just see them trying to fuck with democracy. It’s all about power,” he said of Republicans. “…It’s sad.”

He believes the Democratic Party could “be a bit stronger” and laments that they don’t fight harder. “I just want them to start swinging.”

Some of his Republican targets and their supporters haven’t taken too kindly to Morton’s foray into politics.

“Lauren Boebert was the first and really only person who’s tried to take the website down,” he said.

She sent him a cease and desist last year, he said, which he ignored.

Morton, who’s from Colorado, said that Boebert personally confronted him while he was filming outside her restaurant a few months later. “All of the sudden this lady starts yelling at us, and my cameraman was like, ‘Dude, that’s Lauren Boebert.'”

It’s not clear if she knew who he was at the time.

“I went back to the hotel and she followed my cameraman to the parking lot and that’s where she pulled out her camera phone and he pulled out his,” he said.

Morton uploaded the video to Twitter, where it “went crazy.” Hours later, he says a random Twitter user uploaded a video that could’ve only been filmed by Boebert.

After that, things died down for a while, Morton said.

That changed when the Stefanik website went live days after the Buffalo shooting. He’d already created it and planned to publish the page when the shooting happened. Immediately thereafter, he held off. It wasn’t a time for laughing, he said.

It went up a few days later. The page attacks Stefanik for repeating the great replacement theory, which the alleged shooter included in his manifesto. “What is in his manifesto is what I placed into his head. Why? Because I want power. I want votes,” it states.

In a statement after the shooting, Stefanik claimed she “never advocated for any racist position or made any racist statement.”

Stefanik didn’t respond to a request for comment sent via email Thursday afternoon.

According to screenshots Morton recently posted, someone claiming to represent Stefanik emailed to demand he remove the website over a blog on it claiming that she asked Trump for a preemptive pardon.

Morton acknowledges that there’s no evidence that Stefanik asked Trump for a pardon. He characterizes the site as pure mockery. The article on Morton’s site states, “Elise Stefanik is one of the members of Congress who would be dumb enough to have asked for a pardon.”

“An unnamed source working for the Stefanik team exclusively told EliseStefanik2022.com, ‘Yes, we do believe she’s the 2nd dumbest member of Congress right behind Lauren Boebert.'”

Morton said he doesn’t worry about getting sued. Politicians are public figures and he feels comfortable that it’s clear his work is satirical. He notes that each site includes the disclaimer “this is parody.”

“They’re funny and I get a little out of line, but I want to make it clear it’s a joke and it’s parody,” he said.

The joke is lost on some people. He said that Stefanik and Rubio supporters troll him the most. “I’ve gotten a lot of DMs from just random people who are saying they’re really upset that I have the Proud Boys on there,” he said of the Rubio site.

An anonymous buyer recently tried to purchase that site for $250, he said. When he turned it down, they upped the offer. To $300.

Morton says that politicians’ ire is good for web traffic. On June 14, he tweeted that the Stefanik page had experienced a 340% increase in traffic over the weekend.

He told the Daily Dot that his Boebert parody site got 200,000 views on Wednesday alone.

Morton is planning to expand on current pages and create additional websites in the near future. Rep. Marjorie Taylor Greene (R-Ga.), Sen. Ron Johnson (R-Wisc.), and Texas Gov. Greg Abbott (R) are all on his list.

He intends to drop an expanded Rubio site on Friday, with an Abbott page to follow soon thereafter.

He said he also has URLs for Sen. Rand Paul (R-Ky.) and Mitt Romney (R-Utah). The only nonpolitician he thus far plans to satirize is Kyle Rittenhouse.

His fans love what Morton’s doing. “I get a lot of DMs daily … I’m getting a lot of help just from my Twitter followers,” he said.

Some believe he’s in it for the money. A screenshot he tweeted on Tuesday of an email from Stefanik’s purported representative intimates as much.

“The fact that these websites survive on donations shows your weakness, and that weakness is financial stability,” it says. “Cease all donations and prepare to meet our lawyers.”

Morton’s sites don’t have ads, but he does accept donations. He receives just enough funds to pay for the sites’ hosting and upkeep.

“I’m fine with that because I didn’t expect to make anything from these,” he said.