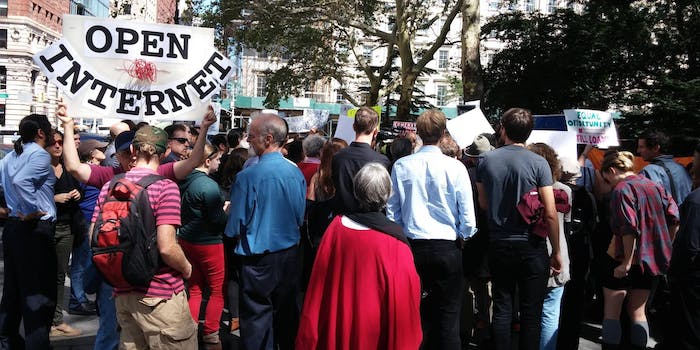 "What they're doing is the gravest threat to free speech as we know it, a threat to the basic human right to communicate."

The Comcast Center, a 974-foot-high monstrosity, dominates the Philadelphia skyline, dwarfing every other building in the city. Resembling a giant USB stick, it is a permanent reminder that the country’s least-favorite telecom giant is here to stay, whether the average Philadelphian likes it or not.

On Monday afternoon, however, the tower’s doorstep played host to representatives from the Media Mobilizing Project, Common Frequency, Free Press, and concerned citizens, who chanted and held signs directed at the telecommunications giant, as security guards and confused Comcast Center personnel looked on with wary eyes. Their goal: The preservation of net neutrality and the stoppage of Comcast, Verizon, AT&T, and other conglomerates from deciding who has access to the Internet.

“We’re here to make a statement about the power that companies like Comcast have over our everyday lives,” Hannah Jane Sassaman, an activist with the Media Mobilizing Project and one of the rally’s leaders, told the Daily Dot. “What they’re doing is the gravest threat to free speech as we know it, a threat to the basic human right to communicate.”

A hundred miles away, in New York City, Free Press and other groups held a companion “Rally to Save the Internet” in front of City Hall. Among the speakers who addressed the large crowd were Zephyr Teachout, the former New York gubernatorial candidate, and her running mate, the law professor Tim Wu, who, not coincidentally, also coined the phrase “net neutrality.” Activists held signs saying things like “Cable monopoly isn’t the answer,” “Save the Internet for the common people,” and “Equal opportunity: still loading.”

Craig Aaron, the president of Free Press, introduced each speaker. To break up the speeches, he led chants like “What do we want? Net neutrality! When do we want it? Now!” and “L-O-L, O-M-G, we want net neutrality!” 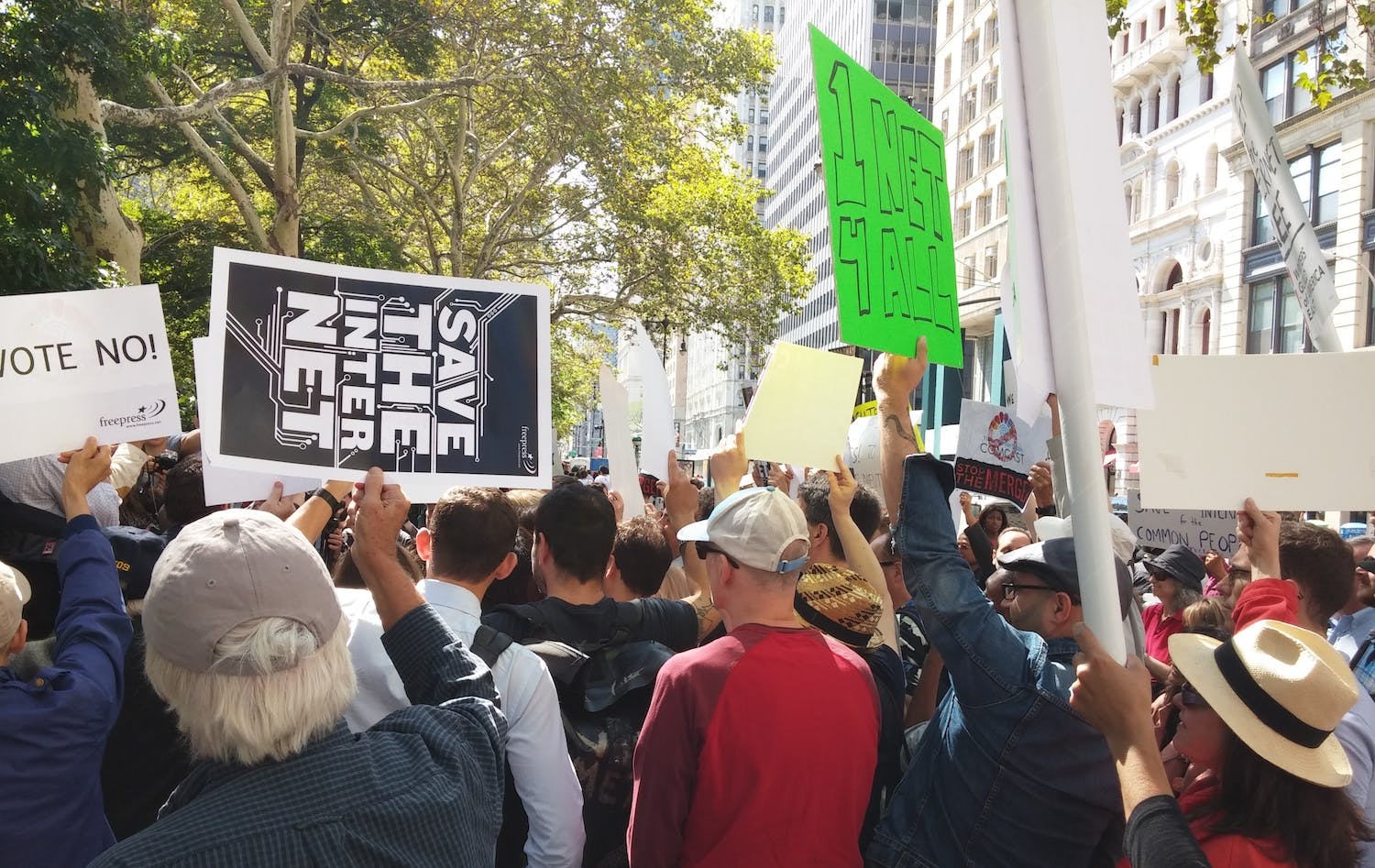 Free Press and its allies had ensured that the rallies would be felt in Washington. Aaron told The Daily Dot that fellow Internet advocacy group Fight For the Future and the domain registrar Namecheap had placed a digital billboard directly outside the FCC’s headquarters in the capital. “They’re showing scenes from these rallies,” he said. “They’re showing videos that people have made on YouTube and elsewhere about net neutrality, and they’re going to be doing that for the next 24 hours.”

The rallies were staged on Monday because it is the last day that the Federal Communications Commission (FCC) is accepting public comment on its plans regulate net neutrality. If the FCC approves its plan as-is, it would allow Internet service providers (ISPs) like Comcast to charge Internet companies (like Netflix or Google) to deliver their content more quickly to users—a so-called broadband “fast lane”—something the crowds in New York and Philadelphia are strictly against.

Another key issue of protests was the proposed merger of Comcast and Time Warner Cable, which critics argue would expand local ISP monopolies in places like Philadelphia, thus giving customers even less control over how they access the Internet.

Starting promptly at 12:30pm—right in the middle of lunch hour in the busy downtown Philadelphia business district—Sassaman and other demonstrators passionately pled their case for the preservation of net neutrality. Over 100 activists, journalists, curious pedestrians, and students joined the rally, toting anti-Comcast banners, pro-net-neutrality signage, and even a papier-mache effigy of Comcast CEO Brian Roberts. 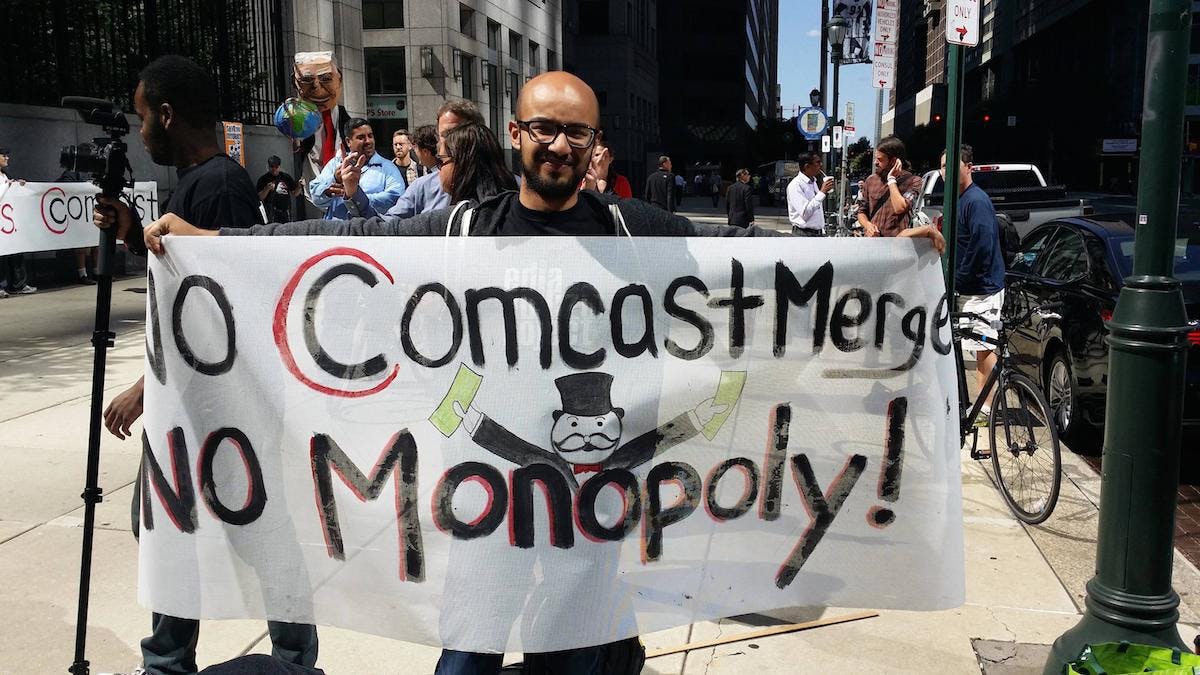 “We’re living through a critical moment in our nation’s history,” Joseph Torres, a representative of Free Press, said to the crowd. He likened the issue of net neutrality to the corporate buyout of TV and radio waves 100 years ago. “Does the FCC believe that big business should decide whose voices should be heard and whose should be silenced?”

Needless to say, his question drew a resounding, loud “NO!” from the crowd.

Meanwhile, in NYC, the large crowd listened to Tim Wu blast the proposed Comcast-TWC merger as a detriment to society. Comcast, he said, would strike a “corrupt deal” with the government, likely involving plum appointments to various corporate boards, and in return, it would gain increased control over the market. It would raise taxes, he said, effectively levying what Wu called “a tax on the people.”

The only way someone could support the merger, Wu said, is if they aren’t looking at what the public wanted.

Zephyr Teachout then explained why “we need to stop this merger.” She called on the New York State Public Service Commission to reject the deal when it votes on October 2.

Teachout and Wu had campaigned on net neutrality, and they had found people receptive to their stance, Teachout said, because everyone with a computer knew that their service was already too slow. Net neutrality, she said, is “the most extraordinary democratic opportunity we have on the Internet.”

Later, Jennifer Pozner, the founder of Women In Media & News, explained how the Internet allowed new voices to break through the tightly controlled environs of corporate media. It was the Internet, she said, that gave voice to the network of feminist writers who explored the misogynist roots of the UC-Santa Barbara shooting spree, in which 22-year-old Elliot Rodger took out his frustration over being rejected by women on over a dozen people.

Transitioning to a broader discussion about corporate versus independence voices, Pozner asked the crowd, “Do you think Comcast wants our voices to be heard?”

“No!” the audience shouted.

Andrew Rasiej, the founder of Personal Democracy Media, told the New York crowd that the open Internet debate reminded him a battle that the city fought long ago over another utility: water. In 1799, Aaron Burr, America’s third vice president, founded the Manhattan Company and gained a monopoly on New York City’s water supply. Just like today, Rasiej said, this private service benefitted moneyed interests more so than the people.

In 1842, after a series of cholera epidemics, New York City finally began providing access to water to all residents as a public service. Rasiej said that now was the time to do the same thing with the Internet.

“Our political system,” Rasiej said, “has been subverted.” 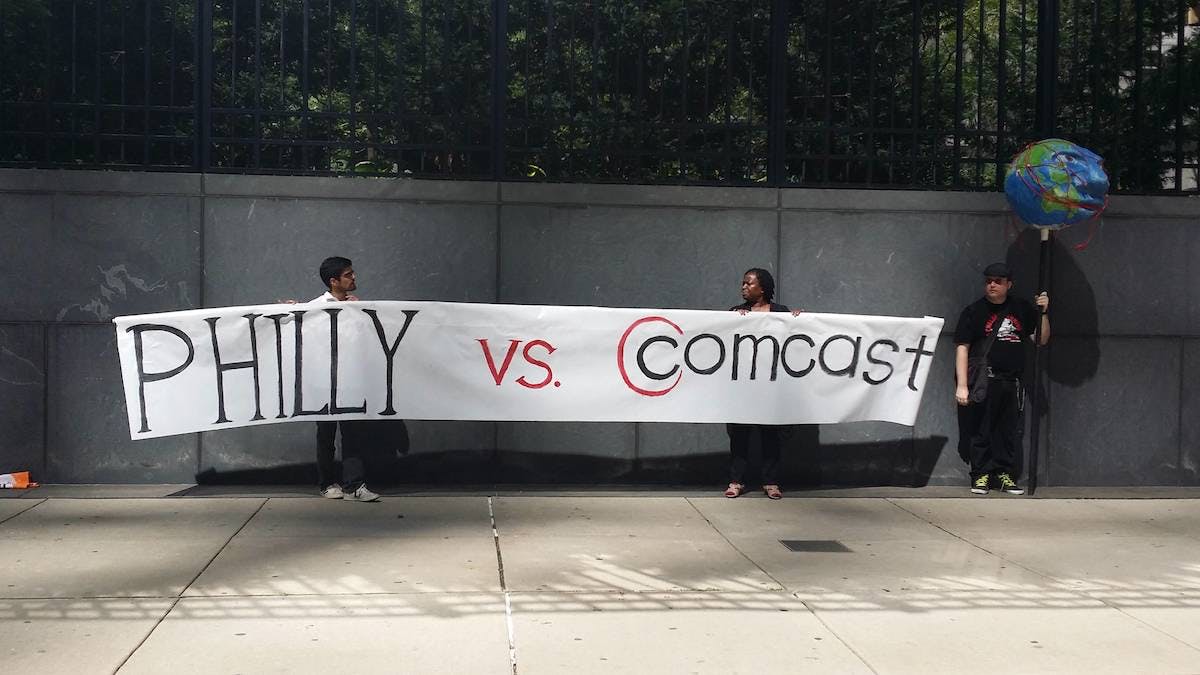 In Philadelphia, education took center stage. Antoinette Holliday, an after-school leader at a neighborhood rec center, told a heartbreaking story of how Comcast refused access to free computers and heavily-discounted service to impoverished students in her neighborhood—despite its pledge to do the exact opposite as part of its “Internet Essentials” program.

“Only two of our six kids who were promised the free computers actually got them,” Holliday told the Daily Dot. “When asked for a reason, we were told that their parents owed money to Comcast. But their parents’ names weren’t on any list [of delinquent customers] we obtained.”

“Kids’ whole lives are online! They should be receiving free computers and service just for education alone,” she added. “Comcast earned $64 billion! Don’t tell me they can’t afford it!”

Chris Rabb, a professor of innovation and entrepreneurship at Temple University, agreed with not only Holliday’s pro-education claims, but also on the issue of a free, unfettered Internet in general.

“The open Internet is a public good—it is ours,” Rabb said to thunderous applause. “It is our tool as much as it is the plaything of corporations. Net neutrality may be boring to you now, but you’ll miss it when it’s stolen from you.”

Other speakers at the rally were common, everyday folks who were tired of Comcast’s ever-soaring prices and its notorious customer service. Upon hearing about the rally, they made their way downtown in the middle of their otherwise busy Monday to make sure that their voices were heard.

“I’m here because I just plain hate Comcast,” said Jenny, an older woman in her mid-60s who relocated to Philadelphia from Middletown, New York, years ago. “Back home, I paid $30 a month for great cable service. But here, I can’t even get basic cable for that price! So I just stopped watching TV. And I am very happy that I don’t watch TV news anymore.”

Outside New York’s City Hall, Free Press’ Craig Aaron explained the connections between the net neutrality debate and the proposed merger. Comcast, he said, had “already been caught … illegally blocking traffic,” a reference to Comcast’s 2007 throttling of BitTorrent traffic on its network. The FCC later found the practice violated the law, a judgement that was overturned in 2010 and eventually led to the agency’s first Open Internet Order establishing strong net neutrality in the U.S. That order was struck down by a court early this year.

“If they get this deal done, [Comcast-TWC] will be the dominant cable company in two-thirds of the country,” Aaron said. “They are a company that has shown time and time again, despite the claims they make when trying to sell their mergers, that they’re very interested in violating net neutrality.”

Aaron said that Comcast was “very interested in an Internet that works a lot more like cable TV, where they can pick and choose the channels for you, speed things up for the people that pay them special tolls, and slow everybody else down.”