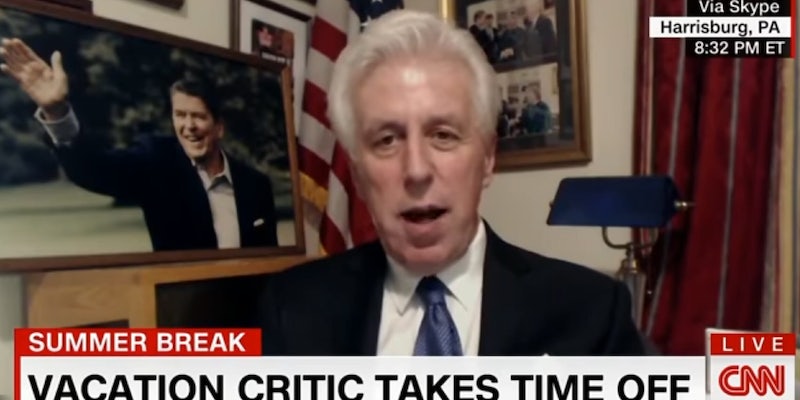 One of Trump's strongest supporters on CNN is out.

CNN will no longer have pundit Jeffrey Lord, a vehement supporter of President Donald Trump, on air after he tweeted “Sieg Heil” at a liberal activist.

Lord made the comment, the Nazi salute for “Hail my leader” used during Adolf Hitler’s rise to prominence, during a Twitter spat with Angelo Carusone, the head of Media Matters for America, a liberal watchdog group.

The comment came after Lord published a column for the American Spectator, in which he criticized Media Matters. When Carusone tweeted at Lord criticizing the column, he responded with the Nazi salute.

“Nazi salutes are indefensible,” a CNN spokesperson said in a statement. “Jeffrey Lord is no longer with the network.”

Lord has been a prominent supporter of Trump on CNN for months. He was hired in 2016 during the campaign to be a  pro-Trump voice on the network.
Lord and Media Matters have been in a developing feud for weeks, ultimately culminating in the Nazi salute from Lord. In his American Spectator article, Lord called the organization “Media Matters Fascists” and “anti free speech bigots.”
In a follow up to the tweet spat, Lord said he was “mocking” Nazis and fascists.
You can read CNN’s account of the network’s separation with Lord here.
Share this article