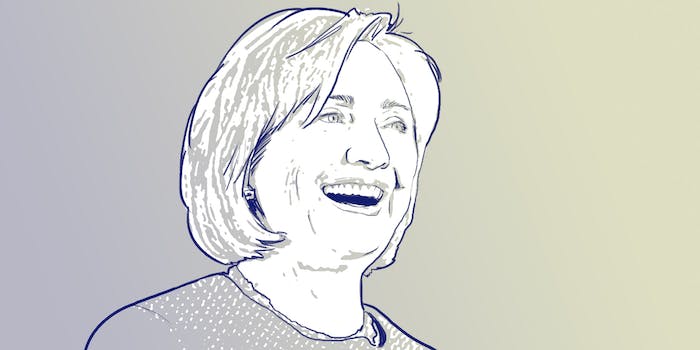 The Clinton campaign says it was just a joke.

What would you do if a man who lost his job told you he wanted to hurt the boss who fired him? Now, imagine you’re Hillary Clinton.

This scenario became a reality for Clinton, who is now under fire after laughing when an audience member said he wanted to “strangle” Republican presidential candidate Carly Fiorina, the former CEO of Hewlett-Packard, at a campaign event in New Hampshire on Tuesday.

The man, who did not give his name, said he used to work for HP as a systems engineer. That is, until Fiorina laid him off alongside roughly 30,000 other employees.

Fiorina was CEO of the company when it merged with two smaller firms in 2002 and subsequently fired tens of thousands of longtime employees. She was forced to resign in 2005.

The man at the Clinton campaign event said that it angered him whenever he saw Fiorina campaigning in the press—especially when Fiorina referred to Clinton as a liar after the Benghazi hearings.

“Every time I see her on TV I wanna reach through and strangle her,” the man told Clinton. “I know that doesn’t sound very nice… but I can tell she’s lying because her lips are moving.”

At the mention of strangling, Clinton laughed along with the audience. Then she responded: “I wouldn’t mess with you.”

“By laughing off a male questioner’s desire to strangle Carly Fiorina, Hillary Clinton and the Democrats have lost all credibility claiming to be a party that stands up for women,” the RNC press secretary Allison Moore said in a statement. “Jokes about committing acts of violence against women are always in poor taste and should be condemned every time.”

Pool followed up and Clinton didn't engage. Nick Merrill, Clinton's spox, said, "You were there. What was your take? It was a joke."