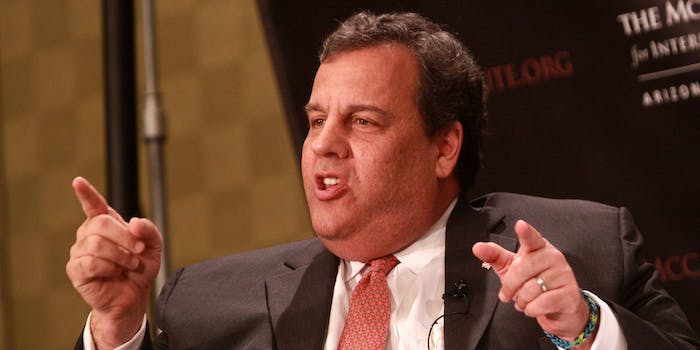 At the Republican National Convention this week, insults and threats toward presumptive Democratic presidential nominee Hillary Clinton are flying left and right, including linking the former secretary of state to Lucifer. A number of criticisms were lobbed her way during New Jersey Gov. Chris Christie‘s convention speech on Tuesday night.

“Tonight, as a former federal prosecutor, I welcome the opportunity to hold [Clinton] accountable for her performance and her character,” Christie said. Throughout his speech, the crowd broke into chants of “Lock her up.”

In a quick response to Christie’s remarks, Clinton’s campaign shared a snap Wednesday of an amicable meeting between her and Christie earlier this year. CNN’s political producer Dan Merica shared a recording of the Snapchat story on Twitter.

In the video, Christie can be heard saying, “All I do is hug Democrats, you know that, it gets me in trouble all the time.” In a following clip, he said, “Tell the President I said hi … Good luck out there.”

Christie, who at one point was considered a strong contender to become Republican presidential nominee Donald Trump‘s vice presidential pick, said he was speaking at the RNC not just as governor but as a friend of the businessman for the past 14 years. He dragged Clinton for her “dismal record as Secretary of State.”

But Clinton, clearly, was prepared with the receipts.