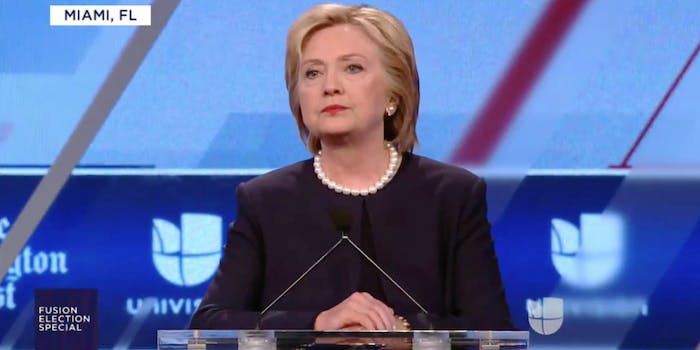 Hillary Clinton dismisses possible indictment forcing her out of 2016 race

'Oh, for goodness—that's not going to happen.'

During Wednesday night’s Democratic presidential debate, Hillary Clinton brushed aside speculation that she would be forced out of the race due to a federal investigation.

Clinton admitted she made a mistake but denied she broke any rules for using a personal email address during her time as secretary of state, failing to save her messages to State Department servers, and allegedly sending classified messages that put the United States secrets at risk.

The Obama administration’s secretary of state from 2009 to 2013, Clinton dismissed the possibility that she’d face a criminal indictment and refused to answer a question on the matter.

“That’s not going to happen. I’m not even answering that question.”

“It wasn’t the best choice,” Clinton said. “I made a mistake. It was not prohibited. It was not in any way disallowed.”

Debate moderator Jorge Ramos pressed her on the issue, asking, “If you get indicted would you going to drop out?” Clinton laughed off the possibility as ridiculous.

The truth behind Clinton’s assertion that the private email server “was not prohibited” is complicated, because there are numerous rules on communications and accusations of wrongdoing that Clinton faces.

Experts believe Clinton did break established rules on transparency by storing her emails personally, away from government records and public scrutiny. The rules against Clinton’s behavior existed for years before she entered office. However, the meat of this controversy is not at all about federal transparency rules.

Instead, the focus has almost entirely centered on the possibility of classification laws being broken, the corresponding FBI investigation into the email servers, and the possibility of the U.S. Department of Justice levying criminal charges against Clinton, who currently leads the Democratic presidential race.

The U.S. State Department has released 30,068 Clinton emails, 22 of which were deemed top-secret, 65 secret, and 2,028 earned the “confidential” label, the lowest level of classification.

It is a crime to remove classified information from secure government channels either knowingly or through gross negligence.

“I did not send or receive any emails marked classified at the time,” Clinton said during Wednesday night’s debate. “What you are talking about is retroactive classification. And the reason that happens is when somebody asks or when you are asked to make information public, I asked all my emails to be made public. Then all the rest of the government gets to weigh in.”

The facts of the FBI investigation are not fully known because it’s ongoing. As of now, however, it’s not clear that any of the emails Clinton sent were classified at the time she actually sent them.

The FBI’s investigation is slated to end in May, according to the New York Times.