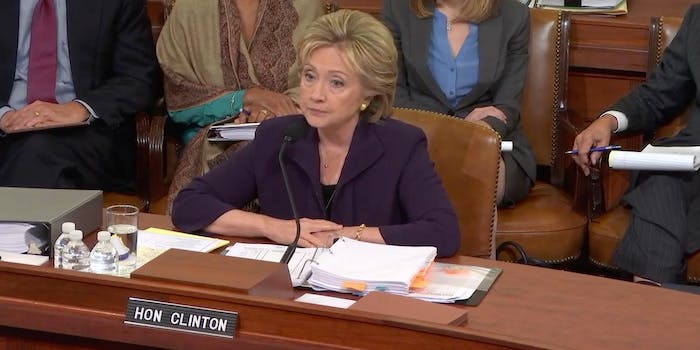 'I've wracked my brain about what more we could have done.'

Hillary Clinton sits at the center of a tense political battle today, as she testifies before members of the House of Representatives regarding the 2012 killing of four Americans in Benghazi, Libya.

The highly politicized hearings come amid former Secretary of State Clinton’s bid for the 2016 Democratic nomination for president.

The hours-long hearing, held by the Select Committee on Benghazi, was the culmination of two years of investigations during which Republican lawmakers have accused Clinton of failing to protect American lives and then lying to the American people about details surrounding the Sept. 11, 2012, attack.

“I’ve lost more sleep than all of you put together. I’ve wracked my brain about what more we could have done.”

“Why were there so many requests for security equipment and personnel, and why were those requests denied in Washington?” Rep. Trey Gowdy (R-S.C.), chairman of the Committee, asked Clinton. “What did our leaders in Washington do or not do, and when?”

Clinton defended herself, arguing that while obviously more should have been done, she did not approve or deny security requests for this facility while she was secretary of state.

“Our military did everything they could, they turned over every rock, they tried to deploy as best they could to try to get to Benghazi,” Clinton said. “It was beyond the geographic range … because we didn’t have a lot of assets [in the area].”

Later in the hearing, Rep. Jim Jordan (R-Ohio), chairman of the far-right House Freedom Caucus, accused Clinton of lying about the reason for the attack in Benghazi when she implied in a public statement soon after the attack that it was sparked by a YouTube video criticizing Muslims that had ignited protests across the Middle East. Records highlighted by Jordan show that Clinton later told leaders in Egypt and Libya that the video was not believed to be the cause of the attack. Jordan also claimed that what Clinton told her family that night contradicted her public remarks about the attack.

Clinton defended her statement, saying that her claim that “some” believed there was a link between the video and the Benghazi attack was accurate, and that she chose her words carefully and deliberately.

“I think the insinuations that you are making do a real disservice to the hard work that the people in the State Department, the international community, the Defense Department, the White House did during the course of very confusing and difficult days,” Clinton said. “There is no doubt in my mind that we did best we could with the information we had at the time.”

Jordan then claimed that members of Clinton’s team met with two men believed to be Al Qaeda militants.

“Were you aware that our folks were wittingly or unwittingly meeting with members of Al Qaeda on the ground in Benghazi Libya just hours before the attack?” Jordan asked. Clinton said she was not, and asked for more details that Jordan did not provide.

At a particularly emotional moment, Clinton asserted that she, more than anyone else, has thought about what more could have been done to prevent the attack.

“I’ve lost more sleep than all of you put together,” she said. “I’ve wracked my brain about what more we could have done.”

The tone on both sides of the aisle was venomous throughout the first hours of the hearing, with a particularly heated moment coming just before the first recess. Ranking Democrat Rep. Elijah Cummings (D-Md.) and Gowdy engaged in an outright screaming match over the emails between Clinton and Sidney Blumenthal, a former aide to President Bill Clinton and a close friend of Hillary Clinton’s. Clinton watched silently as the loud exchange carried on for minutes.

Democrats have criticized the committee as overly political, claiming that it exists solely to damage Clinton’s presidential campaign. Two-thirds (72 percent) of Americans believe the Benghazi investigation is politically motivated, according to a recent CNN/ORC poll.

While Democrats called the hearing a “fishing expedition,” Gowdy countered that, “This investigation is about four people who were killed representing our country on foreign soil.”

The Committee’s interview with Clinton is expected to last until 5pm ET today. Watch the remainder of the hearing, or rewind to the beginning, below:

Screengrab via U.S. House of Representatives/YouTube