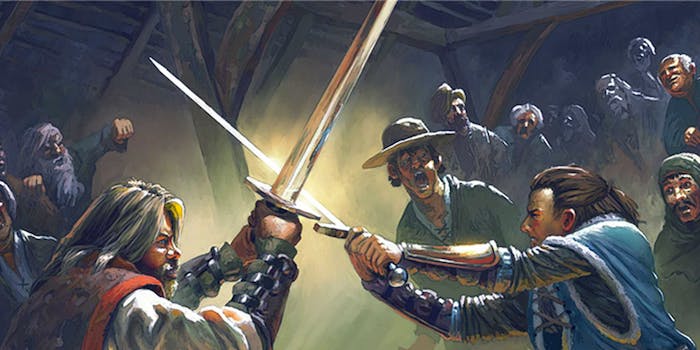 CLANG had everything: A great idea, $500,000 in Kickstarter funds, and support from a legendary sci-fi author. What went wrong?

A word of warning to entrepreneurs: A successful Kickstarter campaign does not equal a successful project.

That’s a lesson the developers of CLANG have learned the hard way. Although they raised half a million dollars on Kickstarter last year, their indie game has all but gone belly up this week.

Fronted by iconic sci-fi novelist Neal Stephenson, CLANG was a sword-fighting game that promised to revolutionize the genre. It held so much potential that 9,023 people contributed to the Kickstarter campaign, making it one of the most successful ever on the site. This crowdfunding triumph seemed to portend great things for the game’s development.

But it turns out that’s not the case, as the team behind CLANG, the Subutai Corporation, delivered a lengthy update this week in which they said development of the game has been demoted to a “evenings and weekends” project.

In their statement, the developers of CLANG said they simply couldn’t raise additional funds after the Kickstarter funds ran out. Many on the development team have now begun seeking other employment opportunities.

While updating their backers, Subutai found no shortage of excuses for why the project has gone off the rails, everything from the current economic state of the gaming industry to the limitations of Kickstarter policy.

“The overall climate in the industry has become risk-averse to a degree that is difficult to appreciate until you’ve seen it,” the update reads.

Developers also say they were limited in their ability to change course as problems presented themselves because Kickstarter requires that those receiving money fulfill the promised goal or service.

But all these excuses rubbed some donors the wrong way. After lengthy periods of non-communication, many felt like they’d been had. Donor Zarlan felt like the developers had not made it clear that their intention was merely to use Kickstarter as an initial round of funding before seeking outside backers.

“Kickstarter was supposed to be your funding!” Zarlan writes. “If you were only using Kickstarter as a start, to get further funding … you have basically deceived all your backers!”

Others feel the CLANG team still isn’t being forthright. Valancy Wilson said it was wrong of the company to try and blame Kickstarter’s policies for their failed strategy.

“This is the poorest non-apology I’ve seen,” Wilson wrote. “What exactly did you hope to accomplish with this update? Any goodwill I had towards Subutai is lost.”

But others were more forgiving, recognizing that Kickstarter is not a sure thing.

“[I] have backed 63 Kickstarters … and are therefore intimately acquainted with the concept known as patience,” wrote Koshinator. “Keep doing what you’re doing.”