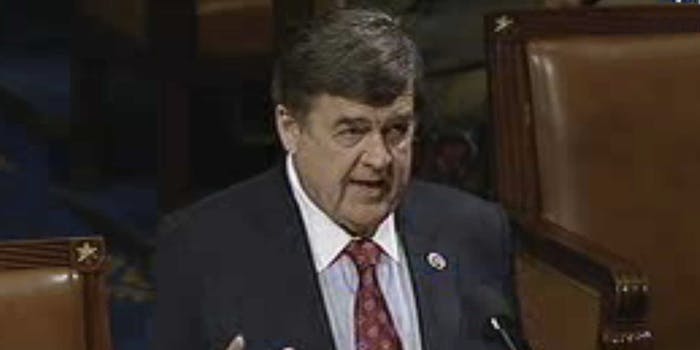 CISPA cosponsor: “Anonymous was threatening us”

A sponsor of the infamous Cyber Information Sharing and Protection Act (CISPA) said hacktivist collective Anonymous carried out a campaign of threats against supporters of the bill.

A sponsor of the infamous Cyber Information Sharing and Protection Act (CISPA) said hacktivist collective Anonymous carried out a campaign of threats against supporters of the bill.

“Anonymous was threatening us. Anonymous was telling [others] to shut down people who supported the bill and that kind of thing,” Dutch Ruppersberger (D-Md.) told the Hill blog, in an article published Saturday.

Ruppersberger seemed to refer to April 22nd, four days after CISPA passed the House of Representatives. That’s when members of Anonymous staged a protest against CISPA, a bill that would make it easier for private companies to share information with the government in times of online attack—something critics say is a violation of user privacy.

Anonymous’s protest didn’t catch on with any major sites, but the Twitter hashtag #CISPAblackout was used almost 10,000 times. The vast majority of those tweets, however, didn’t address Ruppersberger directly, and a Topsy search shows no actual threats.

President Obama’s advisors have threatened to veto CISPA were it to reach his desk, and the bill is believed to be effectively dead already, as multiple sources in the Senate say no senator is willing to advance it. That’s the same thing that happened in 2012, after a very similar version of CISPA passed the House.

This go-round, though, there’s been a much more vocal popular opposition to CISPA, and it illustrated how much tension exists between Twitter users and CISPA’s proponents. Mike Rogers (R-Mich.), CISPA’s other sponsor, infamously described a typical opponent as a 14-year-old tweeter in the basement. Rogers also participated in the hashtag #CISPAalert, apparently unaware it was part of a promotion that donated money to fight CISPA with each use. And activist group Fight for the Future created a program to tweet both Ruppersberger and Rogers a million times, each with the name of a different user who had signed a petition against the bill.

In the days leading to CISPA’s 2013 House vote, groups like Fight for the Future and the Electronic Frontier Foundation urged constituents to call their representatives in Congress and ask them to vote against CISPA. Ruppersberger seemed to conflate this movement with actual threats, claiming that because CISPA was so toxic to some on the Internet, he urged cosponsors of the bill to keep quiet about their endorsement. The bill passed the House with a strong majority, 288-127.

“I didn’t want [supporters]…to be subjected to those attacks in their districts, and calling and threatening and that type of thing,” he said.  “[S]o we really decided to not get anybody on the bill right away.”