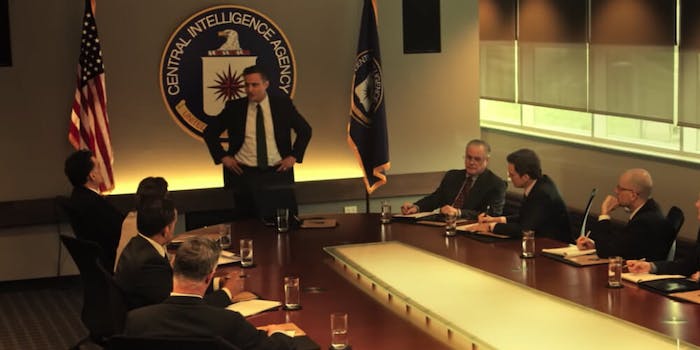 Director of CIA torture movie is tiffing with Mike Pompeo

The secretary of state, who also served as CIA director, claims the movie is 'fiction.'

Secretary of State Mike Pompeo is being challenged online by director Scott Z. Burns after claiming that The Report is a work of “fiction.”

The incident began on Friday when Pompeo, who served as CIA director from 2017 to 2018, criticized the Amazon-made movie. The film centers around the CIA’s use of torture or “enhanced interrogation” as part of the war on terror.

I watched “The Report.” Fiction. To be clear: the bad guys are not our intelligence warriors. The bad guys are the terrorists. To my former colleagues and all of the patriots at @CIA who have kept us safe since 9/11: America supports you, defends you and has your back. So do I.

The film’s title refers to a report that was produced on the agency’s use of torture following an investigation by the Senate Select Committee on Intelligence. The CIA even admitted to hacking into computers used by the committee as it conducted its investigation.

Burns, who directed the film, responded to Pompeo in a statement to Deadline by urging the politician to cite exactly which parts of the movie were false.

“I am grateful to Secretary of State Pompeo for taking the time to watch The Report movie on Amazon Prime. I hope he will go back and read the [Senate Select Committee on Intelligence] report as well,” Burns said. “I am interested in knowing what part he finds to be fiction and I ask him to join me in calling for the release of the Panetta Review which the CIA conducted into the [enhanced interrogation technique] program so that this dispute can be resolved.”

The director went on to agree with Pompeo that terrorists are bad but that those who carried out torture are bad as well.

“I agree with him that terrorists are bad guys—as are the people who conducted barbaric and ineffective acts of torture in the name of Mr. Pompeo’s misguided notion of ‘Patriotism’ and then misled Congress and the American people,” Burns said.

Daniel Jones, who led the investigation and is played by Adam Driver in the film, also called out Pompeo on Twitter by citing a June statement from the State Department condemning torture.

“U.S State Department, June 16, 2019: ‘Not only is torture unlawful, it is morally wrong. Torture is prohibited by international law and is incompatible with the values that define us as a people,'” Jones wrote.

U.S State Department, June 16, 2019: “Not only is torture unlawful, it is morally wrong. Torture is prohibited by international law and is incompatible with the values that define us as a people.” https://t.co/elvsZo2oRh https://t.co/XtTnhBqllf