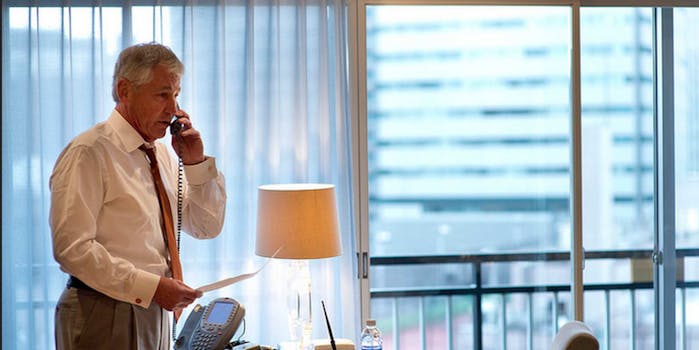 U.S. Secretary of Defense Chuck Hagel will resign from his post, marking President Barack Obama‘s first major staff change since the Democrats lost control of the Senate earlier this month. President Obama announced Hagel’s resignation, with Hagel at his side, on Monday morning.

So why is the head of the Defense Department leaving?

According to the Times, President Obama removed Hagel largely because he sensed that conflict with the Islamic State would require “different skills” than those Hagel brought to the table. The move is also seen as a reset on American military policy around the globe. The Times cited multiple unnamed sources in the administration in reaching these conclusions.

Given the link between ISIS’ advance and Hagel’s departure, Islamic State social media cheerleaders quickly celebrated the news, blasting out hastily produced propaganda in the form of a Twitter hashtag reading “The Islamic State Topples the American Defense Minister.”

Secretary of Defence Hagel resigned … #IS celebrates with hashtag#الدولة_الإسلامية_تطيح_بوزير_الدفاع_الامريكي pic.twitter.com/VY0kyQDhJH

Initially, Obama’s presidency promised an end to military conflicts like those in Iraq and Afghanistan. The first post-9/11 president also said that he would shrink a defense budget that dwarfs those of the rest of the world. This task fell to Obama’s several defense secretaries, including, most recently, Chuck Hagel.

Contrary to the president’s promises, the war in Afghanistan continues to clunk forward, and the president is even  re-expanding America’s role in the country. Sustained conflict in Ukraine, a military coup in Egypt, and civil war in Syria likewise contributed to a negative foreign-policy atmosphere that sapped confidence in the secretary.

Secretary Hagel will remain on the job until the Senate confirms his replacement. As Republicans prepare to take control of the upper chamber, political pundits are raising the possibility that the GOP will drag its feet on confirming a new secretary.

In response to Obama’s recent immigration executive action, Senator Ted Cruz (R-Texas) has specifically threatened to wage political war to block all of Obama’s executive and judicial nominees “so long as the illegal amnesty persists.”

Photo via Department of Defense