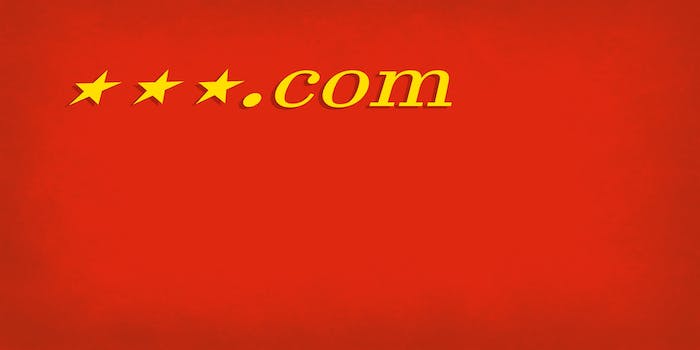 The rules would give China a new way to censor websites.

The Chinese government is preparing new rules for how domestic companies set up their websites, prompting fears about much broader Internet censorship.

The Ministry of Industry and Information Technology on Monday announced that Chinese companies would soon have to set up their websites with local domain-name registries, rather than ones based overseas. This arrangement would let Beijing cut off easy access to those websites by ordering the registry companies to disconnect their domains from the Web.

Domain-name registries link the servers that host websites, which have obscure IP addresses like 216.58.218.238, to easily memorable Web addresses, like google.com. If the Chinese government ordered a registry to delist a website, people could still access it by directly visiting its IP address, but few regular Internet users would know how to do that.

Indeed, it is unclear what purpose a local domain-registration requirement would serve other than to enable the Chinese government to order a site delisted from the global domain-name system.

The information-technology ministry has tried to play down concerns that the registry requirement is a precursor to new censorship, telling Reuters that the requirements “do not affect users from accessing the related Internet content.”

The ministry also told the news service that the rules do not apply to “websites that are accessed overseas,” referring to the sites of companies not based in China.

Adam Segal, a senior fellow in China studies at the Council on Foreign Relations, told the Daily Dot that the new rules, if adopted, “would certainly be a logical intensification of the trend toward greater control over the Internet.”

Segal agreed that the rules’ likely purpose was to set the stage for forced domain delisting, though he pointed out that the government already had other ways to fully shut down sites, such as by holding them liable for content that users posted on their sites.

Segal also said that the new requirement wasn’t surprising, given other “attempts at consolidation of control of the Web and intense ideological campaigns directed at the media, Web, and academia.”

Chinese rulemaking is a vague and complex process, and the exact language of the rules is both subject to change and not necessarily indicative of how they will be carried out.

Despite attempting to court foreign businesses and technology companies in particular, China in recent years has pursued an aggressive Internet censorship program under President Xi Jinping.

In February 2014, Xi took the unprecedented step of assuming personal control over a committee that sought to establish greater government control over domestic Internet access.

In the last two years, Beijing has censored news about a stock-market plunge; arrested 15,000 people for the vague crime of “jeopardiz[ing] Internet security”; threatened to censor Sina Weibo, the largest domestic social network; and banned pseudonyms and other forms of anonymous identification. It blocks access major American social networks like Facebook and Twitter, although several workarounds exist. And it deploys a tool called the Great Cannon to barrage anti-censorship services with traffic designed to overwhelm their servers.