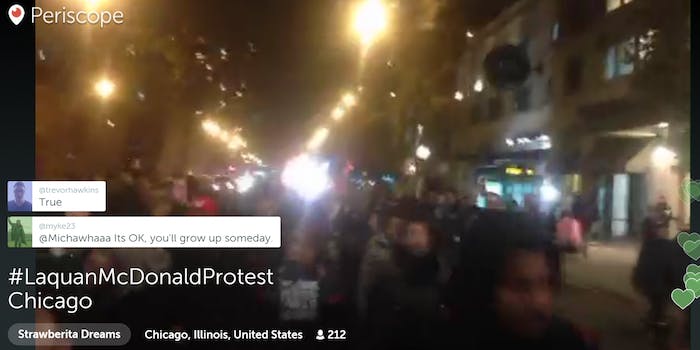 How to attend the Chicago protests live via Periscope

Watch an unfiltered feed of the protests from those on the streets.

Twitter‘s Periscope livestreaming app promised to bring us closer to the news than ever before, and that’s just what it continues to do. Following the release of the graphic video of a Chicago police officer gunning down black teenager Laquan Macdonald, many protesters have taken to the streets with smartphones in hand.

If you’re interested in an unfiltered feed of what is happening on the streets of Chicago tonight, you can tune in to several Periscope streams and watch the events unfold live.

As with all live events—and especially ones being broadcast via Periscope—the streams tend to stop and start randomly, whenever the broadcaster has something interesting to document. However, even if you don’t catch the events live, you can still watch the recent broadcasts via a replay feature built into the Web app.

Here are some of the most active broadcasters in the thick of the protests in Chicago. We will add to this list as new streams become available:

LIVE on #Periscope: #LaquanMcdonald protest in Chicago happening north of the river in Michigan Ave https://t.co/jW8yNO3gfZ

LIVE on #Periscope: #LaquanMcDonald protest continues in the Loop https://t.co/pEIJlYoKSt

You can also search for newer Periscope streams by heading to the Twitter search page and typing a relevant search term. At the moment, “Periscope Chicago” seems to be producing the most relevant results.

Periscope appears to have taken the throne previously held by Ustream as the go-to broadcasting app of choice for protests and activism. The Ustream smartphone app was once the go-to for anyone documenting events such as this, but it seems to have been almost universally abandoned in favor of Periscope.
Screencap via Strawberita Dreams/Periscope