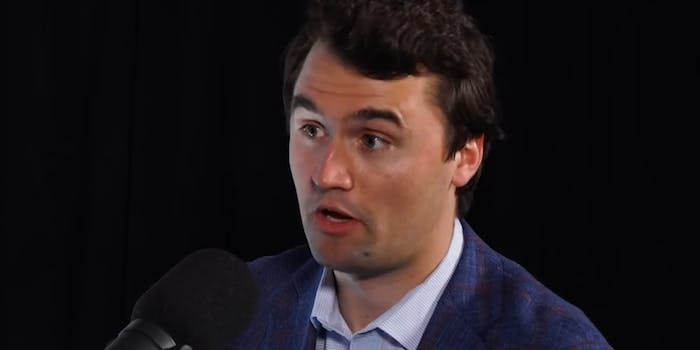 Pro-Trump pundit and Turning Point USA founder Charlie Kirk stated on Tuesday morning that he deleted his Twitter over friends calling out his “stupid” tweets online.

In a tangent about how Twitter can be at times toxic, Kirk told TPUSA activists not to be critics of peers’ tweets on the platform.

“Go message them privately,” he stated. “I deleted Twitter for this exact reason. Because there are these people that I know—I will never forget it— I am texting with one of my friends, and then all of a sudden I get a tweet that he quote-tweets saying I said something stupid.”

Kirk then explained how he once got extremely upset at one of his friends for calling out his bad tweet and his friend going to get his “BTFO.” (Earlier in that same speech he said he lost most of his friends.)

“If you have a problem with it, just tell your friend, ‘maybe you should delete that,’ don’t all of a sudden get on this public humiliation train that benefits no one,” Kirk added.

Kirk made the remarks about his tweets at Turning Point USA’s Student Action Summit in West Palm Beach, Florida to a crowd of young conservative activists.

TPUSA’s winter conference in West Palm has come with plenty of controversies, including causing conservative outrage after the group had “Bang Girls” blast out cash to the audience.