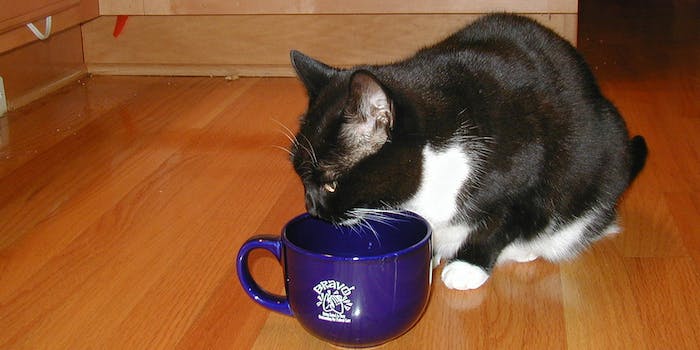 Here's your chance to fund 'Catfe.'

It looks like, finally, your cat CAN haz cheezburger.

A new Kickstarter campaign aims to open “Catfe,” the first-ever cat cafe in Los Angeles. The man behind the project, Carlos Wong, sees the business as a vehicle to strengthen the local community and give sheltered cats the love and attention that they rightfully deserve.

“I am working with local animal shelters to promote animal adoptions and awareness,” Wong said in an email to the Daily Dot, adding that the cafe would host up cat-centric activities, including animal therapy, with area non-profit centers for senior citizens and children.

According to his Kickstarter page, the new cat cafe would welcome cats from local shelters to the cafe to interact with “local artists, bakers, designers, and the sorts.” Food would of course be served, but several sanitary rules will be enforced, including rules that require human patrons to wash their hands before interacting with the cats and also human food will never come into contact with the cats as it is being prepared.

Since its launch, Wong’s campaign has raised more than $2,000 of its $350,000 goal. Backers’ incentives range from free passes to the cafe to having one of the menu’s drinks named in their honor. If the project manages to surpass its funding goal, Wong promises additional amenities for Catfe, including a user-controlled webcam if $400,000 is raised and fully-catered events for local non-profit businesses if more than $550,000 is raised.

Wong’s idea, which he says is “Asian inspired,” has been considered before. In fact, just several hundred miles north of L.A. in San Francisco, a cat cafe without the Kickstarter funds is scheduled to open sometime in 2014.