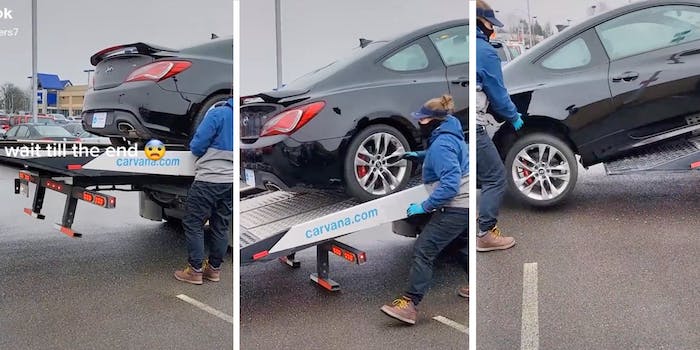 ‘What to expect when spending 30K on a car from Carvana’: Viral TikTok shows Hyundai Genesis delivery fail

One viewer said this isn't the first video like this they had seen.

Carvana aims to create a new approach to car buying, having customers search for vehicles online and then offering to deliver them directly to their driveway. But one TikToker’s video has people rethinking the service.

Chris Dankers (@chrisdankers7) posted a video of Carvana delivering a Hyundai Genesis Coupe that has racked up over 5 million views in the last two days, thanks to the disastrous ending.

Things are going OK for the first few seconds, as the trailer begins the process of positioning the car to be set down on the ground. Someone behind the camera can be heard making a joke about what would happen if the car fell, and immediately after that, sure enough, the car started to prematurely roll down the platform.

Unfortunately, that platform was not yet all the way onto the ground, and though the employee monitoring it scrambled in an attempt to do something, she was ultimately no match for the machine. It dropped off the edge of the trailer into the parking lot, seemingly scraping the undercarriage in the process.

Carvana has received negative press throughout 2021, losing its license to sell cars until next year in one North Carolina county, failing to provide titles to buyers, a California location having to shut down after receiving a cease-and-desist—the list goes on. And while there are positive reviews of the service on the Carvana subreddit, some of the negative ones paint a picture of a fairly miserable shopping experience.

And that might explain why viewers didn’t seem so surprised at Dankers’ TikTok, opting instead to make jokes at both his and Carvana’s expense.

“I don’t know what is worse. The car falling off the trailer or paying $30k on a Hyundai,” wrote @dafreethinker.

“It went from new to like new,” @big_daddy_addie joked.

@dark.mp1 was more straightforward, claiming “Carvana is known for selling stolen and flood cars so I’m not surprised.”

Another viewer said they had seen another video showing the company drop a car upon delivery, and @yammimoto added that a “Carvana trucks rolled in my neighborhood cause the dude drove into a ditch.”

Dankers plans to share more of the story about what happened, but did say that he took possession of the car so that he could get a damage assessment, “then they will refund me or take the car back.”

The Daily Dot has reached out to both Dankers and Carvana for comment.