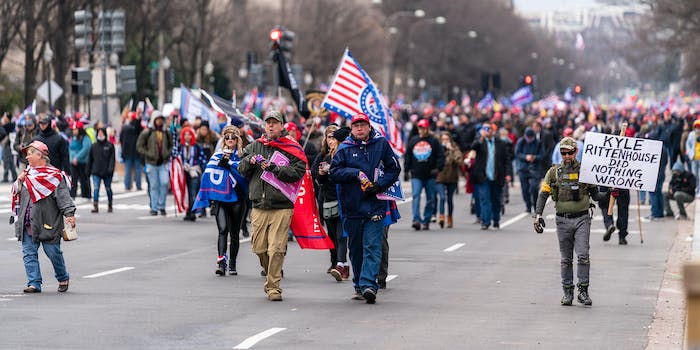 Why do people keep insisting everyone arrested in the Capitol riot is poor?

It's a claim that evidence contradicts.

As arrested Jan. 6 insurrectionists continue to come face-to-face with the legal consequences of their actions, a persistent myth has emerged about them: that most of them are so desperately poor they can’t afford quality legal representation. And because of the crimes they’ve been accused of committing on behalf of a conservative president, left-leaning civil rights organizations like the ACLU, or top-tier firms working pro bono, won’t defend them.

They’re left to their own devices—calling on “patriots” to donate to their legal causes—against the massive force of the U.S. government.

This theory, pushed by huge names in the right-wing media machine like Glenn Greenwald and Dinesh D’Souza, holds that accused Capitol rioters are forced to rely on substandard public defenders and left to the mercy of a Democrat-led Department of Justice—which is hammering them with the harshest sentences possible for minor infractions like trespassing or illegal parading. All of it is part of a massive effort to deny justice to those who questioned the outcome of the election and dared express their adoration of former President Donald Trump.

Some go as far as to call it a chilling crackdown on the right to peaceably assemble.

And yet, numerous court documents, public records, and social media posts show that a good portion of the defendants are neither indigent nor impoverished, but had wealth to spend on the insurrection and no shame in flaunting it. Among those arrested were CEOs, doctors, state legislators, and high-performing realtors

A number of rallygoers, such as the late QAnon believer and business owner Ashli Babbitt, flew across the country to attend the Jan. 6 rally. Dozens came from Southern California, like Babbitt, while dozens of others flew from Texas, Florida, or Illinois. A few even took private jets to the event Trump declared would be “wild”—like a group of Texas real estate agents who apparently pooled their meager savings so they wouldn’t have to fly with the riff-raff in coach.

One husband and wife team of insurrectionists, Lori and Thomas Vinson, were spending over $2,000 a month on payments to keep a fleet of six cars.

At least some of the budding insurrectionists who flew or drove across the country brought thousands of dollars in tactical gear, radios, and weapons—some of which they claimed they specifically bought to take to the Capitol.

So are Jan 6 defendants really impoverished patriots? Or are they fairly well off and just taking money being offered by someone else for their defense? Like with most complex issues requiring deep study, it’s a little bit of everything. Some Jan. 6 defendants definitely can’t afford a private attorney, but many definitely can, and are actively paying for them.

In some sense, it’s irrelevant to even ask whether the accused can afford attorneys—the constitution that they fought against provides them with one. The Sixth Amendment requires all criminal defendants to have access to an attorney, and if they can’t afford one, one is provided at public expense. In federal cases, these attorneys are known as federal public defenders, and Jan. 6 rioters unable to afford representation are being represented by the D.C. office of the Federal Public Defender. While overworked and lacking resources, the D.C. Public Defender Service is regarded as one of the best in the country. And contrary to Greenwald’s tweets, there is no requirement for defendants to be represented pro bono by a major firm, or for the ACLU to defend them. Civil liberties groups have cautioned against the Jan. 6 insurrection being used as an excuse for increasingly harsh domestic terrorism laws, but none have appeared to rally around their causes.

Greenwald isn’t alone in spreading the idea that a large number of the accused are too poor to get a decent lawyer. A June article in the conservative Tablet Magazine claims without evidence that “many of the defendants cannot afford legal counsel” and have to rely on public defenders (implying a subpar defense), while other accused Capitol rioters have taken to crowdfunding their growing tabs—with millions of dollars coming in for defendants through places like the Christian crowdfunding site GiveSendGo to help with the “unjust legal bills.” And in supporting Greenwald’s attack on a USA Today intern who wrote a story about Jan. 6 legal crowdfunding, Dinesh D’Souza referred to Capitol rioters multiple times as “indigent defendants.”

But is there data to actually support the idea that they’re impoverished? While economic information isn’t available for all of the more than 650 Capitol defendants, the Chicago Project on Security and Threats examined socioeconomic numbers for 193 of those arrested after Jan. 6, and their findings don’t show that these were desperate and poverty-stricken transients. Only 9% of the rioters they examined were unemployed, and 40% were either business owners or held traditional white-collar jobs. And several defendants boasted on social media that they had spent lavishly on suites and amenities at the Grand Hyatt or at Trump’s Washington, D.C. hotel—which had conveniently jacked up its room rates in advance of the “wild rally.”

At the same time, many Jan. 6 defendants clearly can’t afford a lawyer on their own, hence them turning to crowdfunding. It was in his tweet responding to USA Today’s crowdfunding story, which he saw as a legacy media company essentially snitching on accused rioters attempting to get the best defense money can buy, where Greenwald first used the term “impoverished.” It should be noted that the USA Today story itself makes no declarations about the income levels of those crowdfunding their defense. The story merely reports that some have raised six figures through platforms that later cracked down on their use for Jan. 6 funding.

While the exact number of Capitol defendants with a public defender is still unknown, an analysis in late February revealed that about 60 of the so-far 200 people arrested didn’t have a private attorney. Later research found that about half of the attorneys representing Jan, 6 defendants are public defenders or court-appointed counsel, according to a story by the Washington Post. And New York Times legal reporter Alan Feuer, who is extensively covering the Jan. 6 prosecutions, tweeted in response to Greenwald that his last tally was about 110 defendants utilizing a federal public defender. This is a substantially lower percentage than the 66% of typical federal felony defendants represented by a federal defender, according to Bureau of Justice Statistics findings from 2000.

That said, the office is so strained by the amount of evidence it has to deal with that it was looking at one point to develop its own database to handle the influx. And a few defendants have actually elected to defend themselves in court, often by firing their court-appointed attorney.

Complicating the “impoverished” narrative is a Washington Post expose from February on the “history of financial trouble” that many of those arrested brought with them to Washington. While the Post story never uses the words “impoverished” or “indigent” to describe the insurrectionists, it does reveal that many had a history of bankruptcy, were facing foreclosure, or had been hit with tax liens. Many others had personal debt exacerbated by their expenditures in going to Washington for the protest, possibly because they believed they would get a “blanket pardon” from Trump. Naturally, this story itself was criticized for highlighting the supposed “economic anxiety” of the mostly middle-class white people arrested, which it doesn’t actually do—merely reporting that some had financial problems caused by overspending or poor business decisions.

Ultimately, the factors that go into a defendant hiring a private attorney or being represented by a public defender are complex, with access to a public defender restricted by income level. And without complete economic histories for each of the accused, it’s impossible to say whether “most” or even “many” are too impoverished to be able to hire a lawyer, or are utilizing crowdfunding simply because fellow Trump supporters are more than willing to give them their money.

It’s also inaccurate to imply that because some can’t afford outside legal representation, that they won’t get any at all; all of them will be represented, other than the ones who fired their lawyers and are defending themselves. But it is accurate to say that at least some don’t have the financial resources to pay for the defense they think they deserve and are relying on overworked and underfunded federal public defenders.

Like all subjects that spawn conspiracy theories, it’s a complex issue that defies an easy answer.