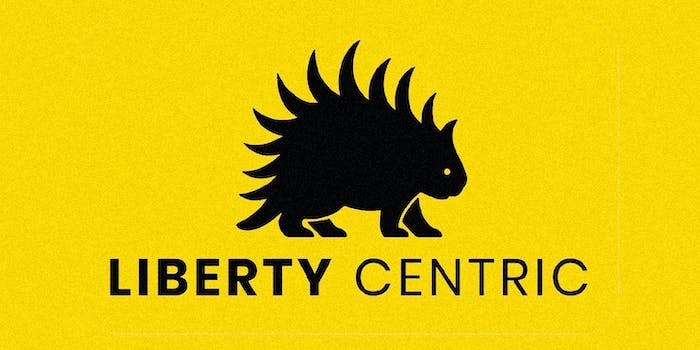 'You won’t get a fake fact-check by some leftist group when you post there.'

A 26-year-old New York man arrested for allegedly attacking a police officer with a baseball bat during the Jan. 6 Capitol riot is currently promoting a social media platform from behind bars.

Edward Jacob Lang, who has been held in a Washington, D.C. jail since Jan. 16 after being hit with numerous charges including civil disorder and violent entry, announced to the conspiratorial blog the Gateway Pundit a new social media venture known as “Liberty Centric.”

The site, which was quietly launched to little attention last year, is now being inundated with new followers after the blog praised it as a streamlined “free speech platform.”

“It is an easy-to-use Facebook-type alternative,” the Gateway Pundit wrote. “And you won’t get a fake fact-check by some leftist group when you post there.”

A video advertisement from Liberty Centric describes the platform as being outright opposed to any bans or censorship as well as “false” fact-checkers.

It remains unclear who is currently running the platform given Lang’s incarceration. Lang’s profile, however, includes posts made as recently as Wednesday, which largely revolve around images of Bible verses.

Other notable profiles on the platform include those for the Gateway Pundit as well as Wayne Allyn Root, a prominent conservative radio host and conspiracy theorist.

“Hello fellow free thinkers!” one new user wrote on Friday. “I just learned about this new platform via Gateway Pundit. Happy to be here!”

The Daily Dot was able to set up an account using the handle @realDonaldTrump, the same handle used by former President Donald Trump on Twitter prior to his ban last year. Whether Liberty Centric will reverse its policies regarding no bans to remove the account remains unclear.

At least one user immediately called for the fake Trump profile to be removed despite the platform having no visible policy regarding impersonation accounts.

The site’s Terms of Use, which consists of a single paragraph, also makes no mention of impersonation accounts. The Terms of Use state that all users must refrain from illegal activity and “Love God with all your Heart.”

The Daily Dot reached out to Liberty Centric to further inquire about the platform’s policies but did not receive a reply by press time.

Lang was recently offered a nine-year plea deal but has reportedly chosen to take his case to trial. Earlier this month Lang held an interview over the phone with far-right personality Stew Peters in which he called on Trump to come to his and other incarcerate rioters’ aid.

“We are rotting in jail because we stood up for what you told us to stand up for!” Lang fumed.

Despite the serious criminal charges, the Gateway Pundit has framed Lang as a persecuted political prisoner. The blog fails to mention any of his charges and instead claims that Lang saved a fellow Trump supporter’s life from the Capitol police.

Liberty Centric is likely to face the same issues as other so-called free-speech platforms such as Gab, GETTR, and Parler, which have all been beset by trolls and hackers. The impending launch of Trump’s social media platform Truth Social, which has not been immune to hackers and trolls either, will likely push them out as well, as it’s expected to become the preferred social network for conservative users.