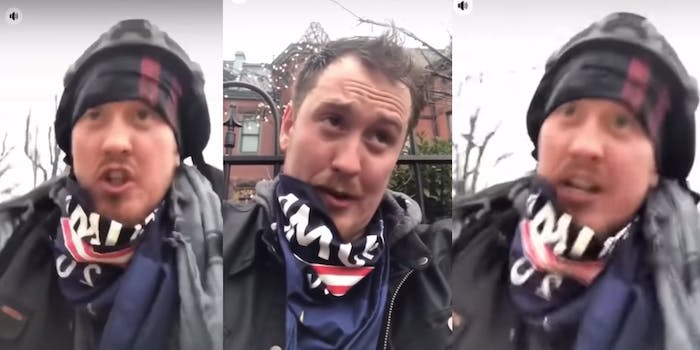 Capitol rioter who begged ‘for forgiveness’ has been arrested

'I realize now that my actions were inappropriate and I beg for forgiveness from America...'

A supporter of President Donald Trump who stormed the Capitol last week has been arrested after begging the public for forgiveness.

Idaho resident Josiah Colt, who was pictured in the Senate chamber hanging off a balcony, was taken into custody after being identified online.

Following the incident, which resulted in the death of five people, Colt appeared to defend his actions in footage uploaded online.

I didn’t hurt anybody in there,” Colt said. “Like, yeah, I did sit in Nancy Pelosi’s seat. She shouldn’t be there.”

But as news of his actions quickly spread, Colt seemingly reversed his position. In an apparent attempt to stave off his impending arrest, Colt told local media that he regretted getting involved.

“[I] sincerely apologize to the American people. I recognize my actions that have brought shame upon myself, my family, my friends, and my beautiful country,” Colt said in a statement. “In the moment I thought I was doing the right thing. I realize now that my actions were inappropriate and I beg for forgiveness from America and my home state of Idaho.”

The attempt at redemption seems to have done little, as Colt was ultimately taken into custody after one of his relatives turned him into the FBI. Colt has since been charged with knowingly entering or remaining in any restricted building or grounds without lawful authority and violent entry and disorderly conduct on Capitol grounds.

The charge related to entering a restricted building could result in up to a year in prison, up to five years probation, and a fine of up to $100,000.

Colt is just one of a growing number of people who have been arrested and charged for their involvement in the riot.