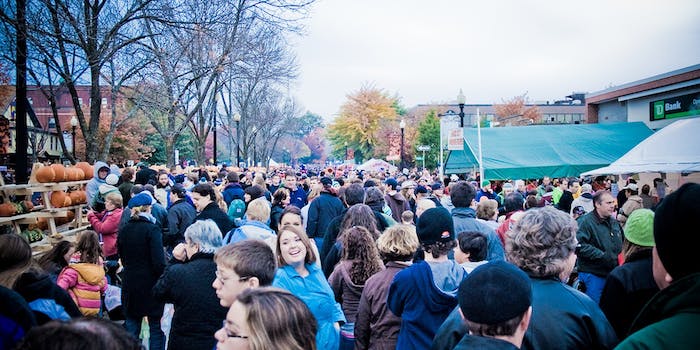 White people need to take a long, hard look in the mirror.

Before we allow the riots that erupted at an annual pumpkin festival in Keene, N.H., this past weekend to recede into the ocean of history, we here at the Daily Dot feel it appropriate to ask a tough question: When will White America get its act together?

It’s been hundreds of years since Caucasian-Americans suffered under the oppressive yoke of British rule, yet they seem destined to continue nurturing their worst qualities—and destroying their own communities. Once again, they have celebrated their lust for white-on-white violence. Why? What are they angry about? Do they yearn for some kind of meaning in a world that has offered them every advantage, regardless of merit?

A photo posted by @sadierenai12 on

It would be one thing if this anti-social and thuggish behavior were anarchic; instead, we find that it falls into patterns determined by whites’ fraternity affiliations. It’s no secret that Keene State College is home to a half-dozen of these dangerous groups, whose cultish and disturbing initiation rites have claimed untold American lives over the last century. They’ve also given us the scourge of frat warfare, catching innocents in their drunken crossfire. Cord Jefferson tried to warn us about the culture of white lawlessness, but we didn’t listen.

Through it all, there is the noxious strain of entitlement. White people say they want to be heard—well, we’re listening, and you all sound like you’ll never know the meaning of personal responsibility. Instead of pulling themselves up by their bootstraps, whites chase unrealistic dreams of reality TV fame or careers in professional hockey. Instead of fostering an ethnic identity of which their children can be proud, they choose to attack other races. It’s more than a bit galling that white people blame their struggles in life on things like affirmative action when they take millions in government handouts each year to pay for college classes that they either sleep through or barely pass because they plagiarized from Wikipedia.

Somewhere along the way, whites became consumed with the specter of “reverse racism,” and this fixation is holding them back. (We wanted to title this piece “The Keene Pumpkin Festival Looks Like a J. Crew Catalog,” but apparently that doesn’t conform to whites’ absurd standards of political correctness, which threaten to silence free speech as we know it.) Wake up, White America: Everyone knows that reverse racism is over. White people can rap. A few CEOs are white. For god’s sake, we have a half-white president!

It’s time to do some serious soul-searching. To come together as friends and neighbors over glasses of white wine—and maybe some mixed greens with white truffle oil dressing—and cut to the heart of this issue. We know you’re afraid to talk about it, that the conversation will be a painful one, but self-reflection is the only way forward. Remember: This is all your fault.