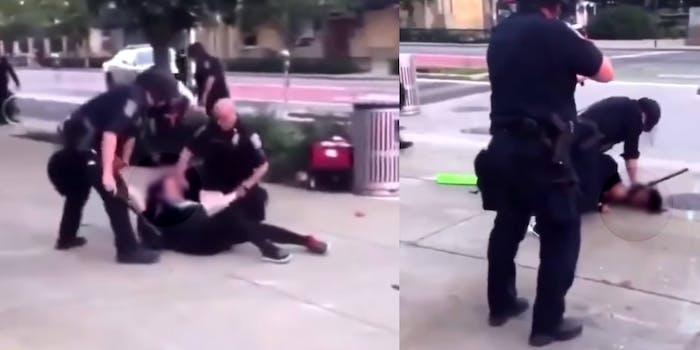 The video has prompted an internal police department investigation.

A viral video shows Indiana police hitting a Black woman multiple times as she tries to break free from an officer who appeared to grope her breasts.

T. Greg Doucette, a criminal defense attorney from Durham, North Carolina, shared the video on Twitter on Wednesday of the incident in Indianapolis.

“You can see the cop grope the woman he’s restraining, that’s why she breaks away,” Doucette wrote in the caption. “Then of course a half dozen cops beat her for not wanting to be groped.”

According to Indystar.com, the incident took place on Sunday evening after the women were arrested, though it’s not clear what led to the arrests. The video was shared in a thread of police violence against protesters marching for George Floyd, but it’s not confirmed whether the women were protesting.

The video, which is less than 30 seconds long, shows two officers restraining one Black woman and one white woman from the back. The officer restraining the Black woman appears to grope her breasts, and she springs out of his clutch.

As soon as she breaks free, an officer fires from a weapon that’s not visible, and it releases smoke near the Black woman. At the same time, the officers who had restrained the women jump in and start hitting the Black woman with a baton. Another officer joins, and two of them continue hitting her until she is on the ground.

The officer with the weapon continues to point it at them.

When the white woman screams, “Why? Why her?” one cop pushes her to the ground, and a few other officers crowd around her.

At least eight officers are present at the scene.

After going viral on social media, the video has prompted an internal police department investigation, according to IndyStar.com.

Sgt. Grace Sibley, a spokesperson for the Indiana Metropolitan Police Department, confirmed the investigation with IndyStar.com but did not provide further information.

Neither of the women have been identified.