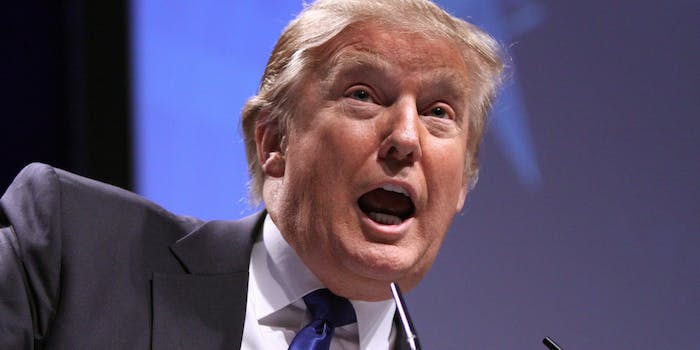 'If they could expand the laws...'

Multiple deadly terrorist attacks in Brussels on Tuesday have garnered responses from across the United States, including from the candidates for president.

Donald Trump, the leading Republican candidate, appeared on Fox Business Network and said if he were president, “I would close up our borders to people until we figure out what’s going on.”

Trump said the Belgian capital had become a “disaster city” and an “armed camp” prior to today’s attacks.

On NBC’s Today, Trump said that his presidency would include torture as a response to the attacks, in an effort to gain more intelligence.

“If they could expand the laws, I would do a lot more than waterboarding,” Trump said. “You have to get the information from people.”

When asked if he believed that torture would result in reliable intelligence, Trump said he was “in that camp.”

Do you all remember how beautiful and safe a place Brussels was. Not anymore, it is from a different world! U.S. must be vigilant and smart!

Ohio Gov. John Kasich, a challenger to Trump for the Republican nomination, put out a statement of solidarity with the people of Belgium.

Our hearts break for the men and women of Brussels this morning: https://t.co/Z3zl8ArMCG

Radical Islam is at war with us. For over 7 years we have had a president who refuses to acknowledge this reality https://t.co/oeEKpWKbN6

We will name our enemy — radical Islamic terrorism. And we will defeat it. https://t.co/Z7YTgUg3AA

The attacks at both the city’s airport and a major metro station in Brussels have left at least 26 dead and more than 130 injured.

American cities, most notably New York and Washington, have stepped up security measures in high-traffic areas like subways and airports as a result of this attack, according to authorities.

Clinton: "I know that Americans have every reason to be frightened by what they see."

Hillary Clinton calls into @TODAYshow: It's unrealistic to say that we're going to shut down our borders.

Clinton re waterboarding "We don't need to resort to torture"

Update 8:57am CT, March 22: Here is Clinton’s full statement on the Brussels attacks:

“Terrorists have once again struck at the heart of Europe, but their campaign of hate and fear will not succeed. The people of Brussels, of Europe, and of the world will not be intimidated by these vicious killers. Today, Americans stand in solidarity with our European allies. Our thoughts and prayers are with the families of those killed and wounded, and all the people of Belgium. These terrorists seek to undermine the democratic values that are the foundation of our alliance and our way of life, but they will never succeed. Todays attacks will only strengthen our resolve to stand together as allies and defeat terrorism and radical jihadism around the world.”