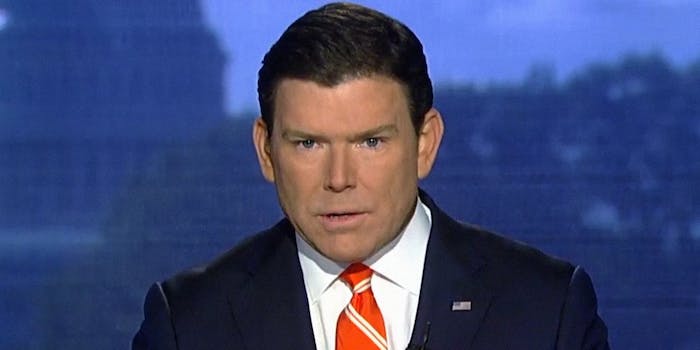 Fox News dropped an explosive scoop on Tuesday, announcing less than a week before the presidential election that an indictment is likely to follow an FBI inquiry into the Clinton Foundation. However, certain elements appear only dubiously based in reality.

Citing sources with “intimate knowledge” of an ongoing investigation, Fox News host Bret Baier told millions of viewers the Federal Bureau of Investigation was receiving an “avalanche of new information” about the Clinton Foundation “every day,” supplementing a year-long investigation by the bureau’s white-collar crime division.

The source of that information, Baier said, was WikiLeaks and “new emails,” a reference to the laptops of Clinton aides Cheryl Mills and Heather Samuelson. According to Baier, those laptops are currently being “exploited” by FBI agents to amass a wealth of information that will ultimately lead to an indictment involving the Clinton Foundation.

But whether Baier is inventing details about an FBI investigation, or his sources are leaking false information, his assertions seem to conflict with the facts: While WikiLeaks files are plentiful, the bureau itself has not obtained warrants to investigate emails related to the Clinton Foundation. The only way the FBI could browse Clinton Foundation emails without one would be to do so illegally.

It has been reported that Mills and other aides gave their laptops over to the FBI on the condition that contents could not be used against them in court. However, the State Department emails contained on the laptops were evidently reviewed during the course of the Clinton email investigation, which concluded on July 5 with the FBI’s announcement that no criminal charges were appropriate.

The FBI is now reviewing the contents of Weiner’s laptop to determine whether or not it contains information that would have altered its decision. According to Baier, despite the so-called immunity deal, which did not extend to testimony, the FBI has not destroyed Mill’s laptops and is instead now using it to amass evidence against Clinton in an entirely separate inquiry, the preliminary investigation into the Clinton Foundation. (“Preliminary” meaning it has never evolved into a full-fledged investigation, despite its ongoing status for over a year.)

Even after the FBI seized a laptop belonging to Clinton aide Huma Abedin’s estranged husband, former New York Congressman Anthony Weiner, who is under investigation for allegedly sending sexually charged messages to a minor, the bureau was required to obtain a warrant before peeking at emails it believed to be related to the previously-closed investigation into Clinton’s handling of classified information.

The bureau has sought no such warrant to investigate Clinton Foundation emails, according to an FBI source. Baier—or his sources—appear to have conflated two separate investigations.

Under the Electronic Communications Privacy Act, the FBI may access emails stored by third-parties, such as Yahoo or Google, with only a subpoena, though a warrant would still be required for emails unopened and less than 180 days old. (A subpoena is easier to obtain than a warrant because the standard of suspicion is much lower.) The laptop shared by Abedin and Weiner, however, is a home device—as is Clinton’s server—and has additional protections granted under the Fourth Amendment.

Therefore, the FBI would need an additional warrant to read any Clinton Foundation emails contained on these devices, or on the laptops of Mills and Samuelson. That hasn’t happened.

But that’s not the only questionable detail in Baier’s report. “Finally, we learned there is a confidence from these sources that [Clinton’s] server had been hacked,” Baier announced. “And that it was a 99 percent accuracy that it had been hacked by at least five foreign intelligence agencies, and that things have been taken from that…”

The notion that the FBI has suddenly found a foreign government’s fingerprints inside Clinton’s server is objectively illogical. Clinton’s servers were inspected by forensic experts more than a year ago. Those experts found no evidence of a breach, much less five. FBI Director James Comey was explicit on this point when he spoke to reporters at the bureau’s headquarters in Washington four months ago.

Unable to rule out the possibility, Comey did say it is “possible” that “hostile actors” gained access to Clinton’s emails, but that the FBI found no direct evidence of such a breach. Given the nature of the system, he added, the FBI believes it “would be unlikely to see such direct evidence.” Comey added that “hostile actors” had gained access to the “private commercial email accounts of people with whom Secretary Clinton was in regular contact from her personal account.” Even if one or all of these individuals were hacked by “at least five foreign intelligence agencies,” that does not mean Clinton or her homebrew server suffered the same fate.

Following Comey’s announce in July, the FBI had no reason to repeat its forensic sweep of Clinton’s server. While it may have cause to do so now, depending on what the agents discover on Weiner’s laptop, the suggestion that suddenly, in the past week, evidence appeared showing “five foreign intelligence agencies” had hacked Clinton is at best unreal—at worst, it is an overt attempt by Baier or his source to spread damning and fraudulent information about a presidential candidate at the twilight of her campaign.

Responding to a request for comment, Jay Wallace, Fox New’s EVP of news and editorial, said, “We stand by the reporting of the Fox News team.”

Update 10:30pm CT, Nov 3: This story has been updated for context and clarity.

Update 1pm CT, Nov. 4: In an interview on Fox News’ Happening Now, on Friday, Baier walked back his reporting.

“All of us who’ve been working this story at Fox have now circled back with our sources, more than six of them now with specific knowledge of the Clinton investigations. They confirmed that there is an active investigation into the Clinton Foundation that has been going on for more than a year, it is continuing and for those investigators working it it is a priority. We have also reported that there is a split, not only between the FBI and Department of Justice on this, but within the FBI. On the hacking of Clinton’s private unsecured server, while multiple sources believe and are operating under the working assumption that the server has been hacked, and some had specific quotes to that belief, there are to this day no digital fingerprints of such breaches.”
“I was quoting from once source about his certainty that the server had been hacked by five foreign intelligence agencies and while others believe that is probable because of confirmed hacking of email accounts that Secretary Clinton communicated with. As of today, there are still no digital fingerprints of a breach no matter what the working assumption is within the bureau. All the time, but especially in a heated election, on a topic this explosive every word matters no matter how well-sourced which brings me to this. I explained a couple of times yesterday the phrasing of one of my answers to Brit Hume on Wednesday night, saying it was inartful the way I answered the last question about whether the investigations would continue after the election and I answered that, ‘yes, our sources said it would. They would continue to likely an indictment.’ That just wasn’t inartful, it was a mistake and for that I’m sorry. I should have said they will continue to build their case. Indictment obviously is a very loaded word, Jon, especially in this atmosphere and no one knows if there would or would not be an indictment no matter how strong investigators feel their evidence is. It’s obviously a prosecutor who has to agree to take the case and make that case to the grand jury. We stand by the sourcing on the ongoing active Clinton Foundation investigation and are working to get sources with knowledge of the details on the record and on camera, hopefully today.”