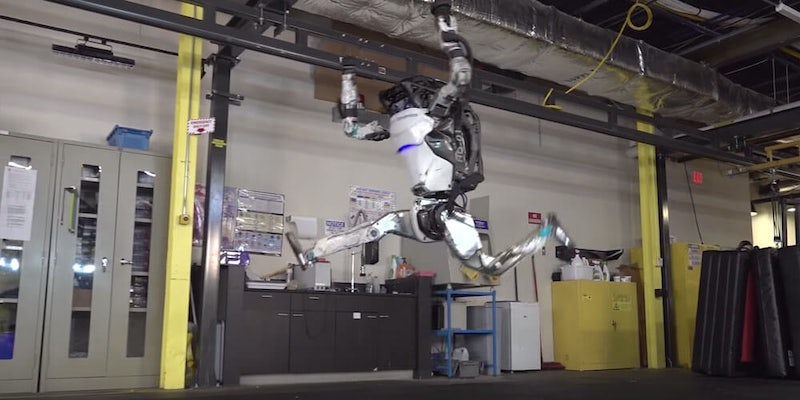 'Spot' the robot dog is being mass-produced, while the humanoid 'Atlas' is doing gymnastics.

Robot-maker Boston Dynamics released two new videos of its creations on Tuesday–and freaked out everyone on the internet in the process.

The Massachusetts-based engineering company, owned by Japanese conglomerate SoftBank Group, announced that it had begun mass-producing and selling its “Spot” robot to select early adopters.

Boston Dynamics says the robot is already being used by customers to “monitor construction sites, provide remote inspection at gas, oil and power installations, and in public safety.”

But just as the internet was attempting to process the news that the company had begun unleashing its Spot legion, even more terrifying news broke out: “Atlas,” a humanoid robot also produced by the company, has taken parkour to the next level.

In another video released by Boston Dynamics on Tuesday, Atlas can be seen performing athletic feats that even most humans can’t do.

If an army of dog-like robots wasn’t terrifying enough, humankind also had to react to a gymnast robot on the same day. “We’re banning e-cigs but Boston Dynamics can just keep on building these agile robots,” Twitter user @BridgetPhetasy wrote.

They're doing gymnastics on the way here.

This isn’t the first time though that Boston Dynamics has freaked everyone out. Although Spot has garnered some people’s respect, specifically for dancing to Bruno Mars’ “Uptown Funk,” the robot terrified the internet last year when it learned how to open doors.

Atlas isn’t any less creepy either. The robot has been upping its game every few months, performing new human-like activities such as traversing through the woods and even performing backflips.