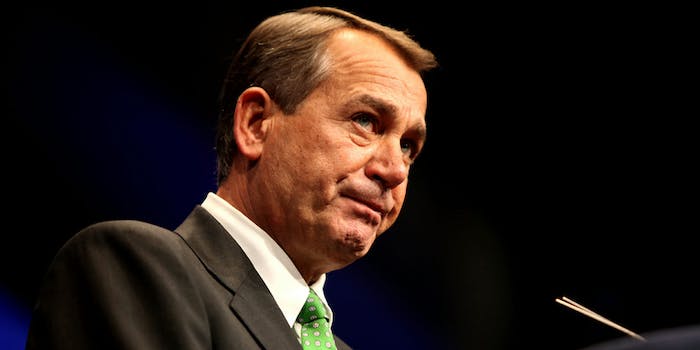 John Boehner thinks Trump has been a ‘complete disaster’

Boehner also had some nice things to say about the president.

Besides helping usher the GOP-led effort to replace the Affordable Care Act, “everything else he’s done [in office] has been a complete disaster,” Boehner said during a speech at KPMG Global Energy Conference earlier this week. He added that Trump is “still learning how to be president.”

Boehner’s candid remarks from the May 24 conference were first reported by RigZone, an oil and gas news website.

During the speech, Boehner said he and Trump had been friends for 15 years and even golfed together. However, seeing Trump in the White House has been something he never thought he’d see.

“I just never envisioned him in that role,” the former speaker said.

Boehner did give Trump credit for his international affairs and foreign policy agenda—particularly his stance against the so-called Islamic State, according to the website.

The ongoing Russia probe also came up, according to RigZone.

“I don’t know why either of these campaigns were talking to Russians, but they need to get to the bottom of this,” Boehner said. “The crazy left wing Democratic colleagues of mine bringing up impeachment talks … talk of impeachment is the best way to rile up Trump supporters. Remember, impeachment is not a legal process; it’s a political process.”

As for any future political plans, Boehner, who resigned as House speaker in September 2015, said he had no plans to run for president.

“I don’t want to be president,” he said. “I drink red wine. I smoke cigarettes. I golf. I cut my own grass. I iron my own clothes. And I’m not willing to give all that up to be president.”