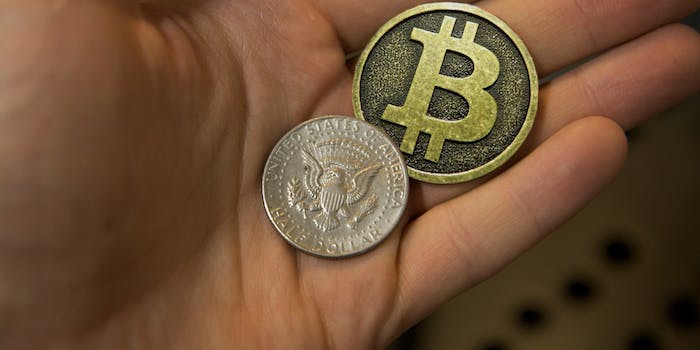 The biggest losers in the fall of Mt. Gox

This is a dark day.

Mt.Gox’s implosion is amounting to an existential threat to Bitcoin. An as-yet-unconfirmed leaked report claims 750,000 bitcoins—a staggering $300,000,000, or 3.4 percent of the bitcoins that will ever be mined—have been “lost.” Understandably, the Bitcoin community is pissed.

The collapse didn’t come from nowhere. Over the last two months, withdrawals from the Bitcoin exchange have slowed; finally, on Monday evening, Mt. Gox halted transfers altogether. Now, if the report is true—the CEOs of the other major exchanges seem to think so—hundreds of thousands of lost or stolen bitcoins means an awful lot of angry people.

One user, using the throwaway account “goxloser,” posted screenshots on Reddit (below) showing a lost balance of 4,752 BTC. Using an exchange rate of $500/1 BTC (though the rate is fluctuating wildly as the community continues to panic and Gox remains silent), this amounts to around $2,376,000 gone. All is not lost for goxloser: He had “sold a bunch at > $1k” but had been attempting to withdraw from the exchange since November to no avail. 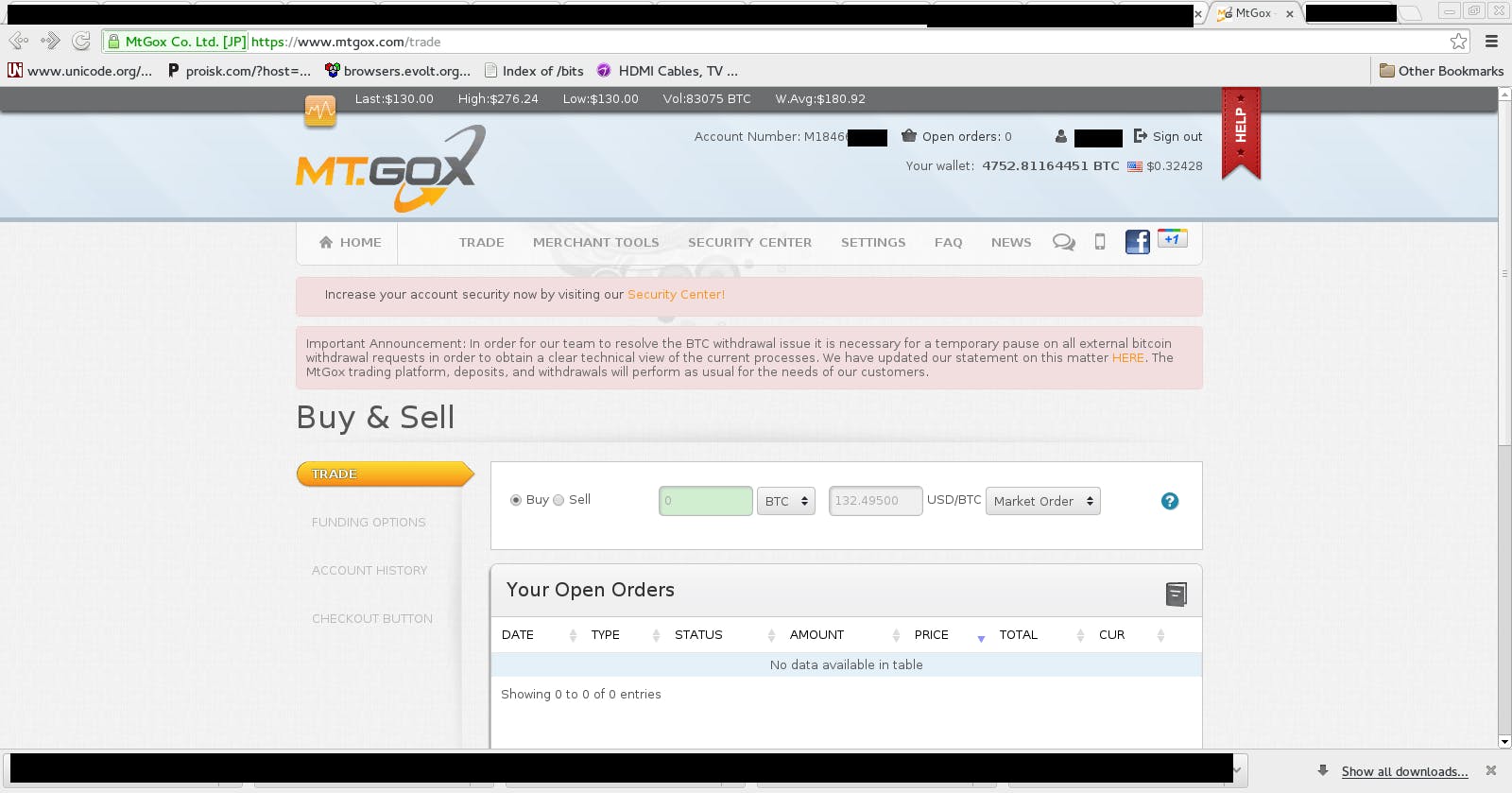 Another redditor, ILoveDEA, claims to have lost a vast 14,342 bitcoins. He offered no proof, but alleges that they’d been sitting in Gox’s vaults for a full four years. He says he invested them in 2010 before he was sent to prison on a narcotics charge. He got out to find his initial sub-$1000 investment was now supposedly worth around $7,000,000, but the verification hurdles Mt. Gox kept throwing at him meant he was never able to cash out. 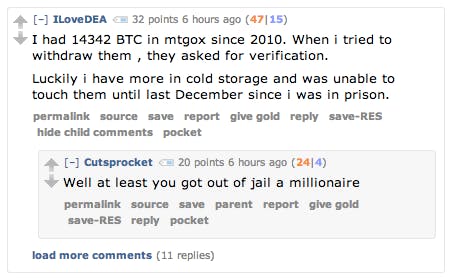 He cites Bitcoin’s liquidity problem: “Once you start selling, the price will start to go down,” he says, “but there’s not enough money injected in the bitcoin economy to pay all.” He told me over Reddit PM how he “tried to sell about 400BTC at $1100, [but] only 20 got sold and the rest never found a buyer.” ILoveDEA’s loss is cushioned somewhat by his backup funds, he says. He’s reluctant to give me the exact figure, but “it is in the six digits (stored in BTC).”

Not everyone is lucky enough to have such reserves. 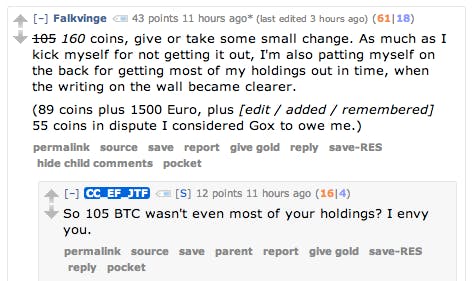 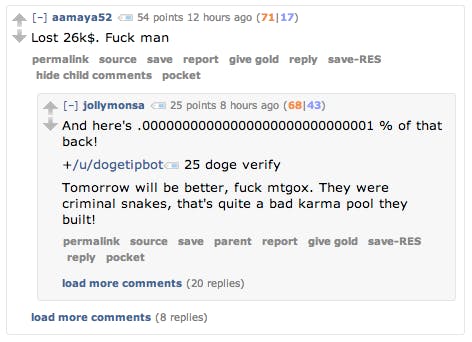 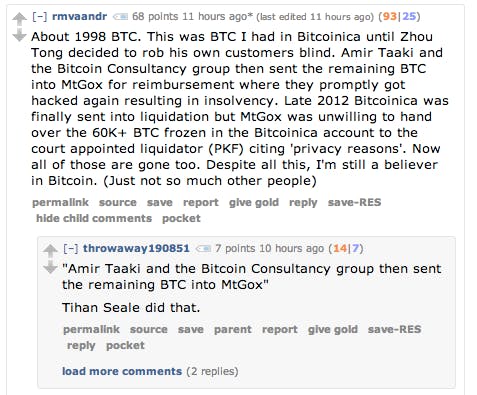 The reddit horror story thread abounds with tales of fortunes lost and life savings down the drain. Little proof is provided, but the sheer number of stories indicates the havoc that Gox’s demise wreaked on the community.

“90.5 BTC. Was going to use them to pay off my student debt. Not any more,” lamented one redditor.

Another, baconslammer, invested $8,500 of his wife’s savings in BTC, stored naively on Mt.Gox. 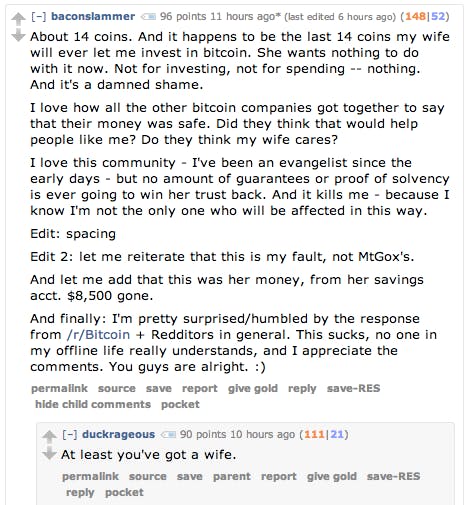 There are hundreds of stories just like his: a few bitcoin a piece, a few thousand dollars—enough to make someone’s life a misery by snatching it from them. 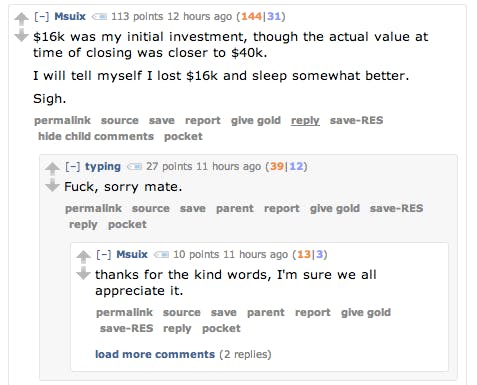 I stupidly had my life’s savings in bitcoin, and when the price started to fall, I converted to dollars and watched the price plummet. I lost $357,000. Not to try to earn a bunch of sympathy or anything but this was not only my money but it was going to be my 5 year old son’s education fund which i took out of fidelity about 1 year ago to mess with bitcoins. I dont know what the fuck to do any more. I’m sitting here on reddit looking for comfort or just something but I don’t know what I’m going to do now at all. I don’t have shit to live for any more and the only thing I have left is just talking about it here I guess. I can’t express what I’m feeling right now. THat shit was just sitting there and I couldn’t take it out how could this whole shop just pack up and dissapear? …if im never going to see my money again all of it im going to either kill myself which i dont want to do because i want to live even though i have nothing to live for now, except my son who is now completely fucked

It’s important to remember that the “leaked” report has not yet been confirmed, though neither has Gox made any attempt to deny it. The “lost” bitcoins may yet still be recovered, which would give investors the surprise of their lives. But the chances of this happening are now looking vanishingly small.

Rick Falkvinge, leader of the Swedish Pirate Party, lost 160 BTC (around $80,000) in what he called “this crater of a belly-up.” Though he declined to disclose his total holdings, he told me he managed to get “most” out.

He’s since gone on the record to say that the claims of a two-year hack are “not credible.”

By all accounts, thousands of people have been plunged into tragedy, losing hundreds of millions of dollars as a result of potentially criminal negligence, if not outright fraud. Panic selling has begun, and the prices of all cryptocurrencies have already depreciated by more than 10 percent. Bitcoin may have been able to always bounce back in the past, but that will be of little consolation to those who have lost everything. This is a dark day.