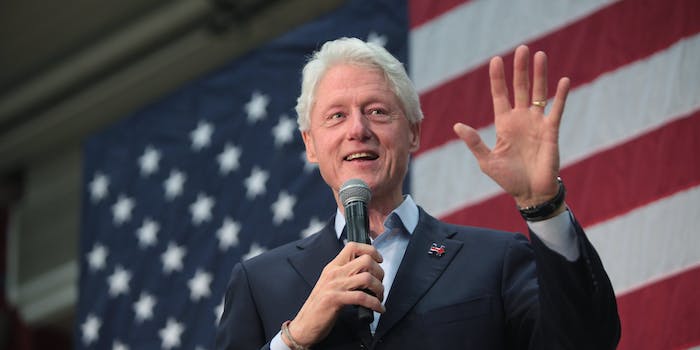 Chauntae Davies stresses that Clinton acted like a 'gentleman' at the time of the photos.

Published by the Daily Mail, the photograph shows Davies, who was 22 years old at the time, rubbing Clinton’s neck in 2002 during a trip to Africa on Epstein’s notorious plane, the “Lolita Express.”

The photographs quickly spread online alongside criticisms of the Democratic Party, which many argue continues to court Clinton despite numerous sexual misconduct allegations and ties to Epstein.

The former president had reportedly complained about a stiff neck after the group landed for refueling in Portugal, promoting accused sex trafficker Ghislaine Maxwell to push Davies to offer Clinton aid.

Maxwell is currently in custody after being arrested in July on charges she helped Epstein run his sex trafficking ring.

Although the photographs are raising even more questions about Clinton’s involvement with the wealthy pedophile, Davies, who claims to have been raped by Epstein, has denied the former president acted inappropriately during the now-infamous trip.

Davies said Clinton was a “gentleman” during their time together and described him as “charming and sweet.”

“‘Although the image looks bizarre, President Clinton was a perfect gentleman during the trip and I saw absolutely no foul play involving him,” Davies said.

The trip, a humanitarian effort on behalf of the Clinton Foundation, also included other famous individuals, such as actors Kevin Spacey and Chris Tucker.

Clinton’s office had previously released a statement regarding the trip and denied that knowing of Epstein’s crimes at the time. The statement also alleged that Clinton only flew on the plane four times between 2002 and 2003, although flight logs show he had actually taken at least 26 flights during that time period.

“President Clinton knows nothing about the terrible crimes Jeffrey Epstein pleaded guilty to in Florida some years ago, or those with which he has previously been charged in New York,” the statement reads.

Epstein was accused of using the plane to traffic underage girls between his numerous luxury estates. The sex offender committed suicide in a New York jail last August after being arrested.

Davies further told the Daily Mail that seeing the pictures once again made her question Clinton’s relationship with Epstein.

“It’s clear that Epstein was using this private jet and his wealth to get close to rich and powerful people,” she said. “Looking back at these images now it raises a lot of questions about why Bill Clinton was using the plane and what perhaps Jeffrey may have been trying to accomplish by having him around.”