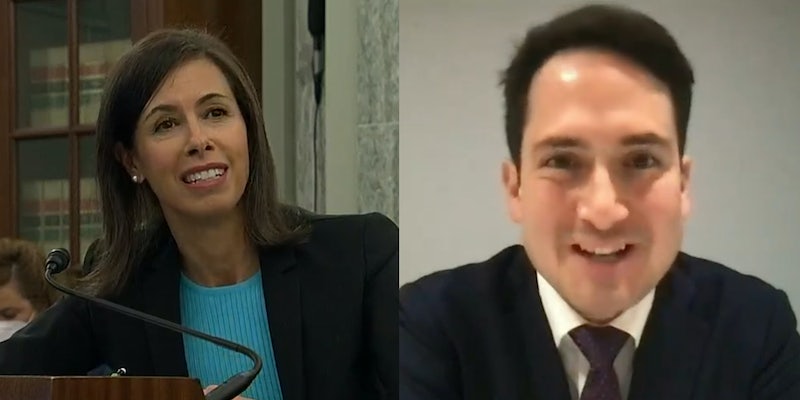 Two of Biden's picks made their way through a Senate committee.

Two of President Joe Biden’s nominees for the Federal Communications Commission (FCC) and Federal Trade Commission (FTC) will move forward to a full vote in the Senate after they passed through the Senate Commerce Committee on Wednesday.

Jessica Rosenworcel, who Biden selected to be the chair of the FCC, and Alvaro Bedoya, who was nominated to be a commissioner at the FTC, both received enough votes in the Senate Commerce Committee on Wednesday to advance out of the committee. It isn’t immediately clear when they would face a full vote in the Senate.

Both Rosenworcel and Bedoya had a confirmation hearing last month. For Rosenworcel, net neutrality was brought up repeatedly during the hearing.

On Wednesday, Rosenworcel was advanced in a voice vote, with a handful of Republicans voting against her. Bedoya’s vote was along party lines, ultimately landing at 14 to 14. Sen. Maria Cantwell (D-Wash.), the chair of the committee, said the tie vote would be reported to the full Senate.

The two nominees are crucial for their respective agencies to get up to full speed. Rosenworcel was nominated alongside public interest advocate Gigi Sohn to fill out the FCC. The agency had been left in a 2-2 partisan deadlock since Biden took office, and if Rosenworcel’s nomination wasn’t confirmed swiftly, the agency risked falling into a Republican majority.

Sohn will have her confirmation hearing today before the Senate Commerce Committee. If both Rosenworcel and Sohn are confirmed, the FCC will finally have a 3-2 Democratic majority, allowing it to move on a number of issues that progressives are hoping to see—such as restoring net neutrality rules.

Meanwhile, Bedoya’s confirmation in the full Senate would similarly give the FTC a 3-2 Democratic majority.