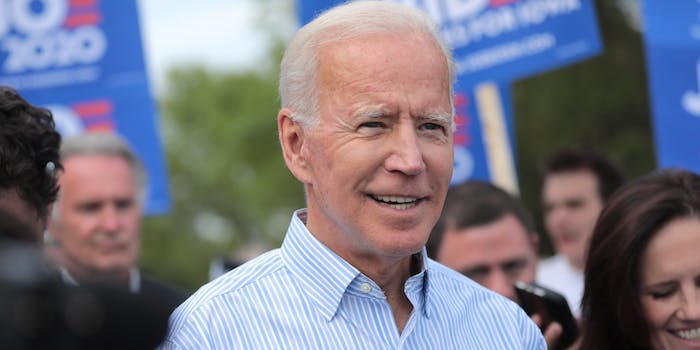 Biden asks for money for presidential transition, told to go to OnlyFans instead

'Didn't our taxpayer dollars already pay for this?'

President-elect Joe Biden stirred outrage on Twitter Friday after asking his followers to fund his transition into the White House.

In his request, which comes as millions struggle to get by amid the coronavirus pandemic, Biden argued that his transition to power needed to be funded by the public due to President Donald Trump’s refusal to concede.

“Here’s the deal: Because President Trump refuses to concede and is delaying the transition, we have to fund it ourselves and need your help,” Biden wrote. “If you’re able, chip in to help fund the Biden-Harris transition.”

But Biden’s plea for cash has not been well received. Twitter users quickly filled the President-elect’s replies with countless reasons why they felt they shouldn’t need to fund Biden’s transition.

“I support y’all and happy you won, but it is outrageous that we are being asked to pay for this,” @badgertexas1 wrote. “There is government money put aside for this transition and just because the baby in charge can’t accept reality should not force this money to be tied up. Take his ass to court!”

Others noted that Biden happens to be surrounded by individuals with immense wealth who could easily pick up the tab instead.

“Such a cynical scam. Joe Biden’s transition team is full of bankers and corporate shills and his campaign is supported by some of the richest billionaires and biggest corporations on earth,” @BenjaminNorton said. “But he wants average people to think he ‘needs help’ and is begging for their money. Sick.”

Spencer Hall even suggested that Biden tighten up his budget, mocking a viral tweet that called on individuals with student debt to make sacrifices in order to pay off their loans.

The outrage was apparent, with users chastising Biden for seeking cash during such widespread economic hardship.

“Don’t send this asshat a dime. Let him ask the 130+ billionaires who donated to his campaign for more money,” @SarcasmStardust said. “Middle of a goddamn pandemic and economic catastrophe and this dude out here fundraising. Gross.”

Many users couldn’t even put into words their disgust at such a request.

“The idea that we would have to independently fund a presidential transition (which we already legally fund with taxes) is so offensive to me that I can’t even sort out what to say,” @necrosofty said.

Users were instead encouraged to donate to struggling Americans instead of Biden’s transition team.

“Instead of doing this, you could donate to food banks, bail funds, or local abortion access and I promise you that money will have a more appreciable and lasting effect on your community,” @transgamerthink said.

Users also suggested that Biden should instead confront the Republican Party for standing by while Trump refuses to concede.

“Congress has appropriated $6.3 million in taxpayer $$ for the presidential transition,” @K9brannen said. “The Trump administration is holding that money hostage by not allowing the transition to begin and the funding to kick in.”

But mostly, users were amazed over the fact that Biden had seemingly chosen to rely on a funding model similar to OnlyFans, GoFundMe, and Patreon.

“When the Biden Harris admin starts an Onlyfans to keep the country running,” @cameraouninema said.

The tone-deaf request from Biden comes as Trump attempts to overturn the election results in court based on totally debunked claims of widespread voter fraud.