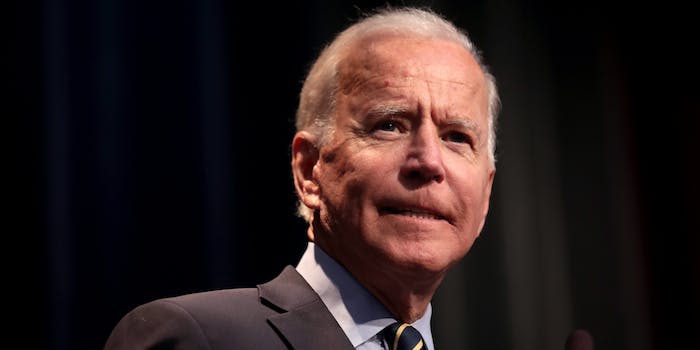 The campaign member is also accused of having used racial slurs online.

A senior cybersecurity adviser for Joe Biden’s presidential campaign has been accused of having ties with a prominent white nationalist.

Jackie Singh, according to an article published Friday in the Washington Examiner, repeatedly interacted over the years with notorious hacker and troll Andrew “Weev” Auernheimer.

Hired by the Biden campaign in July as senior cyber incident responder and threat analyst, Singh is accused of affiliating with a group once led by Auerenheimer known as the Gay N***** Association of America (GNAA).

“From 2009 to 2016, Singh, under the username ‘jax,’ routinely spammed advertising for the GNAA, which relied upon shock messaging to attract members…” the Washington Examiner writes.

While Singh is not accused of being a member of GNAA, which has been described as an “extremist right-wing terrorist group” by the Terrorism Research & Analysis Consortium, chat logs obtained by the Washington Examiner purport to show her using “racial slurs and off-color jokes.”

Singh is also accused of expressing “frustration that the use of the N-word had been banned” from certain chat rooms.

Tweets from Singh’s personal account, which has since been deleted, show her interacting with Auernheimer in 2015 and describing him as a friend.

Auernheimer was once widely-supported among civil liberties advocates after being convicted in 2013 under the Computer Fraud and Abuse Act. The hacker served 15 months in prison after informing the media about a bug on AT&T’s website that exposed users’ personal information.

While Auernheimer’s prejudices were an open secret at the time, his case and eventual release from prison were considered highly important to the internet freedom movement.

Many appeared to believe that Auernheimer’s racist comments were nothing more than mere trolling. The reality became apparent in 2014 when Auernheimer tweeted out a photo of a swastika tattoo on his chest not long after his release from custody.

Auernheimer would go on to leave the United States and become known for his frequent articles on the white supremacist website the Daily Stormer.

Following the 2019 shooting by a white supremacist at an El Paso Walmart, Auernheimer even argued that “random violence is not detrimental to the cause, because we need to convince Americans that violence against nonwhites is desirable or at least not something worth opposing.”

When questioned about her alleged past, Singh denied ever making racist comments or belonging to the GNAA.

“These accusations are categorically untrue and the words falsely attributed to me are anathema to the values I’ve embraced and championed in my life,” Singh told the Washington Examiner. “I’ve never been a member of that group, and the chat logs have been faked and promoted by individuals as part of an ongoing online harassment campaign.”

Singh reportedly declined to answer questions about her alleged ties to Auernheimer.