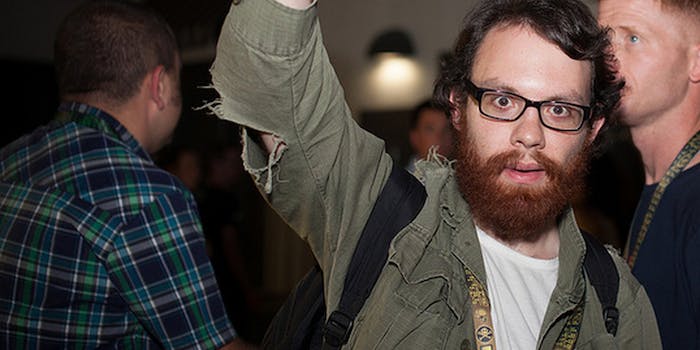 Computer hacker and notorious Internet troll  Andrew “weev” Auernheimer has been sentenced to 41 months in prison for stealing more than 100,000 iPad users’ email addresses, despite claims that he found the information posted publicly online.

Auernheimer was convicted of  “one count of identity fraud and one count of conspiracy to access a computer without authorization,” the Verge reported.

During the court proceedings today in New Jersey, prosecutors cited Auernheimer’s popular Reddit AMA (“ask me anything”) from two years ago. At one point in the thread, Auernheimer discussed how he obtained a person’s social security number online with relative ease.

“Corporations have centralized all that data and hand it out like candy,” Auernheimer commented. “I have spoken out against the systems of credit that have been ruining this country for years, as well as the (largely Russian) gangs that have been stealing from people.”

Auernheimer conducted another AMA Sunday night where he addressed whether he thought the government was just trying to make an example out of him.

“I cannot tell you what I think should be done to fix our current government,”  Auernheimer wrote. “Expression of my thoughts on this subject is a violation of the US code.”

Auernheimer’s sentencing played out live on Twitter, where reports indicated that he was detained for trying to use a cell phone in court.

“Breaking: court agents slam Andrews @rabite head into desk and detain him for using a cell phone in his court hearing,” @Lukewearechange tweeted. “Andrew @rabite tried to hand the phone to his lawyer but was immediately slammed by 8 agents.”

Auernheimer was a member of the group Goatse Security when he gained access to thousands of iPad email addresses in the summer of 2010. Using a script, Auernheimer was able to gather the email addresses “without ever breaking into anything or cracking a single password,” according to TechNewsDaily. The email addresses belonged to ordinary users and high-profile celebrities, including New York City Mayor Michael Bloomberg and entertainment mogul Harvey Weinstein.

As part of his sentencing, Auernheimer must also pay $73,000 in restitution to AT&T.