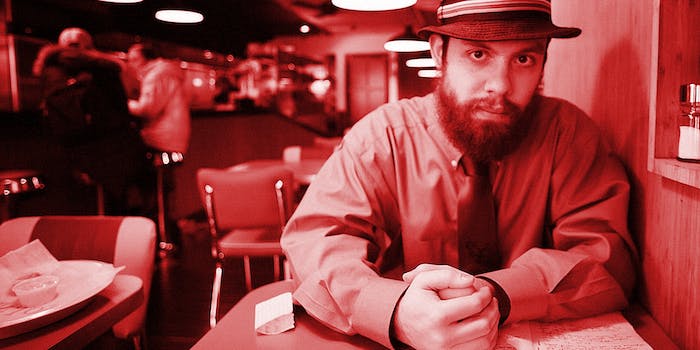 This is no longer just trolling.

Andrew “weev” Auernheimer, the 29-year-old American hacker who became something of a folk hero by beating a controversial hacking conviction, wants you to know that he is incontrovertibly racist.

In a screed posted Thursday to the white supremacist site the Daily Stormer, Auernheimer rants about his treatment under the law, blaming his African-American judge and, more generally, “the Jews,” whom he says built “an empire of wickedness the likes the world has never seen.”

It’s been a poorly kept secret in hacking circles and the media that covers him, including the Daily Dot, that Auernheimer is outwardly prejudiced against those different from him. In his own words, he’s “a long-time critic of Judaism, black culture, immigration to Western nations, and the media’s constant stream of anti-white propaganda.” But that’s fallen by the wayside as online freedom advocates rallied to support him after he found a major bug that revealed the identies and personal information of AT&T iPad subscribers, gave that list to Gawker, was convicted under the Computer Fraud and Abuse Act (CFAA), and spent 15 months in prison before having his case overturned.

“I met Andrew, or weev, for the first time at his ‘welcome back from prison party’ in Manhattan,” Daily Dot reporter Dell Cameron said. “His false imprisonment under a cyber law was part of my beat. My roommate, who writes for Vice, had jumped in the car picking him up with a camera. And for a while after that, he stayed pretty close to my house. … A few weeks ago I’m at his ‘moving to the Middle East party,’ slowly realizing this isn’t some massive troll, when he pulls down his shirt and shows me the giant swastika tattoo that his girlfriend had given him. A friend that I brought with me—who often talks proudly about her Jewish heritage—was standing next to me. I’m not sure I can imagine, or if I even want to imagine, how that must have made her feel.”

When weev got out, he was suddenly something of a celebrity in the Internet freedom world and beyond, appearing in mainstream media like CNN to discuss his case and politics.

Despite his self-assigned “troll” status and his proclivity to offend anyone about anything, Auernheimer found himself with the support of major political movements and organizations like the Electronic Frontier Foundation (EFF) simply because his case—and the precedent it would set—was deemed so important to the law that governed cyberspace.

Auernheimer was released this year and recently left the United States en route to Beirut. In his post today, he attached a shirtless photo, revealing the giant swastika tattoo.

What happens when an almost-accidental minor political icon reveals himself to be a racist? Auernheimer has attempted to conflate the platform he gained from worldwide press coverage with his politics, prompting a debate about where the separation lies in his personal political views and the importance his legal case took on.

I am a friend of @rabite‘s. I can’t believe it took a picture of a swastika for y’all to notice his whole white pride trip. He’s not subtle.

In a series of Twitter direct messages with the Daily Dot, Auernheimer downplayed his role as poster child for those who would cite the CFAA as a source of injustice.

“The best case right now for getting the CFAA relitigated is U.S. v Ulbricht,” he said, referring to alleged Silk Road mastermind Ross Ulbricht, who’s currently awaiting trial. “People who think that we need to reform the CFAA and not overthrow the government, though, are pretty clueless.”

If the Auernheimer saga was purely legal, his political opinions might be easily ignored. However, considering the highly politicized atmosphere surrounding the case and the megaphone the entire affair has afforded him, it’s not surprising to see that Auernheimer’s latest actions are already being used on social media to attack organizations like the EFF and those who supported him during his trial and incarceration.

Tech press & supporters of hacker troll amplify him when it supports their politics but stay silent on his latest: https://t.co/mhJIJhtCF8

Of course, there has been anything but silence in the hours since publication. The missive has been shared and criticized widely on Twitter, particularly in the tech circles that have defended his actions in the past.

So far, Auernheimer’s rant has served mostly to put a wide chasm between the important case he was a part of from the ideas he got in prison and now loudly espouses.