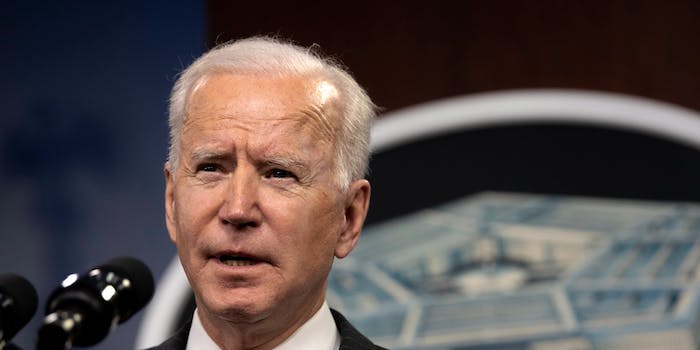 What does he say?

A viral clip of President Joe Biden has become the new Laurel versus Yanny debate.

Over the noise of the helicopter, it’s difficult to ascertain exactly what Biden says. It’s either, “But must been what,” or, as many believe, “My butt’s been wiped.”

Biden’s comments about immigration were lost in the online discourse, however. People focused on whether the president told the press that his derrière was freshly wiped.

Twitter user Kate Hyde appears to have posted a shortened version of the clip that has since been viewed 1.2 million times.

“Laurel or Yanny?” Hyde captioned it, referencing the infamous debate of 2018 over which word someone was saying on a recording.

Her tweet set off an avalanche of comments. The clip eventually was retweeted by large conservative accounts, some of whose followers urged others to tweet #MyButtsBeenWiped. So many complied that the hashtag started trending.

The debate resurrected references to “Diaper Don,” one of former President Donald Trump’s many nicknames.

While many believe that Biden said his butt had been wiped, others heard, “I must be white” or even “my butt’s been waxed.”

Some said that, particularly if you slow the video down, it’s clear that Biden actually says, “But must been what?” to get the reporter to repeat herself over the noise of the chopper.

Many remain convinced that the president of the United States randomly commented on the state of his backside.

So which is it?