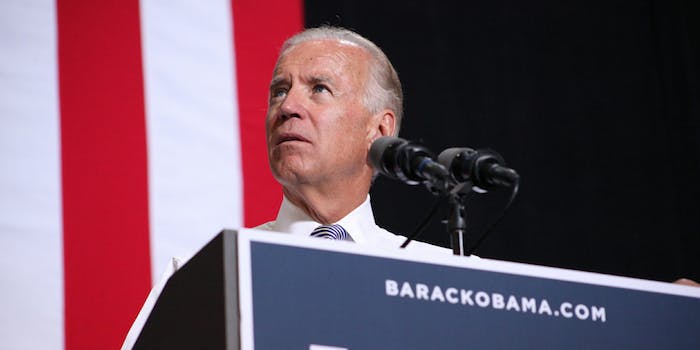 Biden's name has come up a lot as a possible 2020 candidate.

Former Vice President Joe Biden’s name has been tossed around a lot as among the deluge of possible candidates to face off against President Donald Trump in the 2020 presidential election—and he’s not doing anything to stop the game.

On Monday morning, Biden fanned the rumor flames by saying he isn’t “closing the door” on seeking the Democratic nomination in 2020 during an interview with the TODAY Show.

At first, Biden said if “the lord almighty” told him the 2020 nomination was his for the taking right “now,” he would say no. He then began to elaborate.

When pressed by co-anchor Savannah Guthrie about his 2020 intentions, Biden let up.

“No, no, I’m not closing the door,” Biden said. “I’ve been around too long. I mean, I’m a great respecter of fate. But who knows what the situation is going to be a year and a half from now.”

WATCH: "I honest to God haven't made up my mind about that." @JoeBiden says of a 2020 run pic.twitter.com/J4cIsBTzzI

The field of Democrats seeking to take on Trump in 2020 is expected to be unusually large–with names such as Sen. Bernie Sanders (I-Vt.), Sen. Elizabeth Warren (D-Mass.), Sen. Cory Booker (D-N.J.), Sen. Kamala Harris (D-Calif.), and Sen. Kirsten Gillibrand (D-N.Y.) getting a lot of buzz so far.

However, Biden—whose name also cropped up as a possible candidate amid the 2016 Democratic primaries—has raised speculation with the release of his new book, Promise Me, Dad: A Year of Hope, Hardship, and Purpose, and its accompanying nationwide book tour.

Last week, Politico reported that Biden has privately told people that he would run in 2020 if he doesn’t believe another Democrat will emerge from the cloudy, undefined field of candidates that could realistically beat Trump.

“If someone emerges that the former VP believes can beat [Trump], I think he is at peace with that,” a Biden-friendly donor told the news outlet. “On the other hand, if that person doesn’t exist or doesn’t run, you can expect Joe Biden to take a very serious look.”