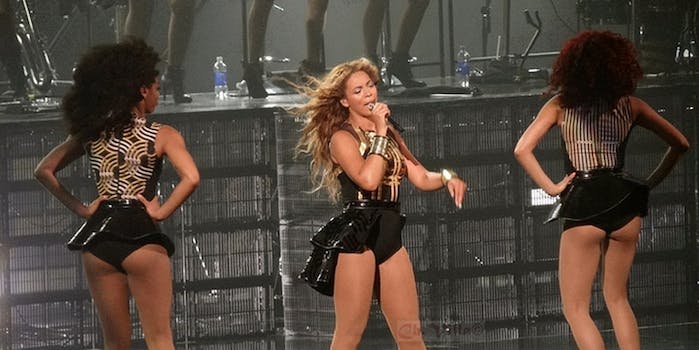 If Amazon and Target thought Bey was going to be shut out without a fight, they were wrong.

Beyoncé’s surprise album release might’ve shaken up the music industry, but not everyone’s thrilled about it. Amazon and Target are refusing to stock CDs of the self-titled new record because the singer gave the exclusive to iTunes.

If they thought someone with the moniker Sasha Fierce was going to be shut out without a fight, they were wrong.

The pop singer symbolically walked into a Walmart store in Tewksbury, Mass., on Friday and made it rain gift cards. She spent $37,500 to distribute 750 cards worth $50 each, a store manager told Us Weekly.

While the gifts came with a warm holiday greeting from Queen Bey, she was presumably also sending a more serious message to Amazon and Target: Mess with me and I’ll cozy up to your biggest competitor. (She also cozied up to a cute baby during her visit to Walmart.)

Target balked at carrying Beyoncé’s new CD because, as a store spokesman said in a statement, “… when a new album is available digitally before it is available physically, it impacts demand and sales.”

Indeed, Columbia Records said the album sold more than 800,000 digital copies worldwide in just three days, a new iTunes record. The popularity of the digital download arguably has more to do with a change in the way people listen to music than the lack of a tandem digital and physical album release, but Target is sticking to its guns.

Amazon, reportedly miffed that Sony Music Entertainment forwent pre-sales as part of the secret release, is offering only digital downloads. Physical copies of the CD are still available through the website via third-party sellers.