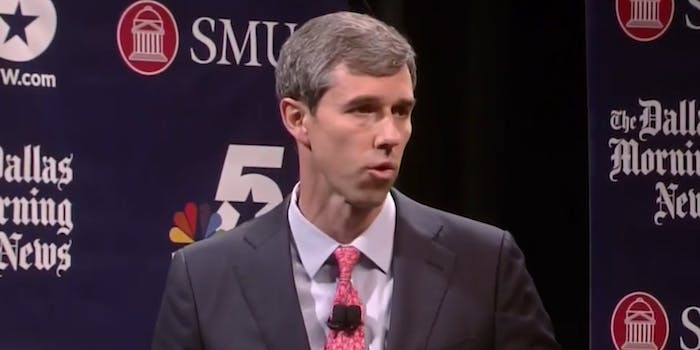 The homeowner who painted a large sign on their lawn in support of Rep. Beto O’Rourke, the Democrat hoping to unseat Sen. Ted Cruz (R-Tx.) in this November’s midterms, is now facing pushback from her Texas homeowner’s association.

The sign was painted by Shannon Bennett of Katy, Texas, according to the Fort Worth Star-Telegram, but before it was finished the local homeowner’s association confronted her about it and Bennett was later given notice telling her she had violated local landscaping codes.

The lawn sign has the word “Beto” written in capital letters on a black background, much like the Democrat’s campaign signage.

“It’s grass, right? You just mow it off, and it’s gone. It’s so temporary,” Bennett told the news outlet. “The code that he was telling us we’d violated is the landscaping code. I said, ‘This isn’t landscaping, it’s a temporary design on the ground.'”

The association that sent the notice, the Chesterfield Community Association, said in a statement to KTRK, a local television news outlet, that the lawn sign violated the Texas Property Code.

“The association’s rules are consistent with state law and Section 202.009 of the Texas Property Code, in that it prohibits political signs that are attached to plant material,” the association said. “The association provided an owner a notice letter giving them an opportunity to cure their violation.”

The confrontation over the “Beto” lawn sign comes as the race between O’Rourke and Cruz continues to draw national attention.

President Donald Trump is expected to hold a rally in support of Cruz on Monday night in Houston. Real Clear Politics, which tracks numerous polls to give an average idea of what polls are saying about campaigns, has the incumbent Republican ahead by seven points.